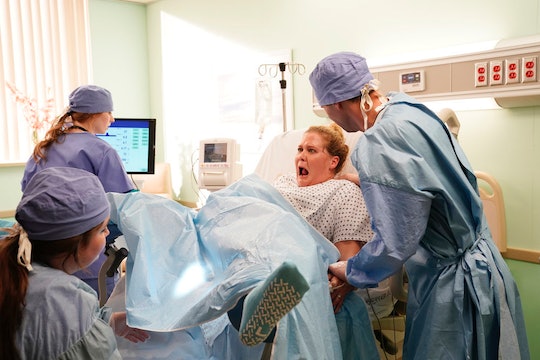 The second Amy Schumer-hosted episode of Saturday Night Live aired right before Mother's Day, so it relied heavily on the holiday to earn some mom-specific laughs. In addition to an opener that introduced the cast member's real moms, there was a pre-filmed sketch that depicted all the joys of motherhood. And the "Day You Were Born" skit on SNL is something all moms need to see.

The skit began in the morning with Schumer's character peacefully sleeping before her husband knocked on the door with a surprise: he hadn't made her a Mother's Day breakfast, but their son had handled the honor instead. Schumer's character was truly touched, but the scene was just too sincere and schmaltzy to be true. There was definitely a joke coming after all that saccharine family fun, and it was prompted by a simple question from the little boy. After Mom complimented his expert toast-making skills, she said the day he was born was the best day of her life. And after hearing that, he wanted to know what that day was like.

Schumer promised him that it was amazing, which was when the skit cut immediately to a jumpy, hand-held shot of her screaming and crying in the delivery room while hospital staff buzzed around her. It was amazing, alright: amazingly terrifying.

The sketch soon became all about contrasting Schumer's all-encompassing labor pain in the flashbacks with her utterly serene present day. When her son asked if she was scared, she assured him that she was actually excited; in fact, she had a big smile on her face the whole time. Dad helped uphold the lie, but a quick return to the delivery day showed it was less a smile and more a grimace of pain. The panic increased when the doctor revealed Schumer had to have an episiotomy and she shrieked, "Don't cut my butthole in half!" But in the present, she was cool as a cucumber.

Then the little boy turned to his dad to ask if he was scared. Dad promised he wasn't, but once again the camera didn't lie: during his son's birth, Dad was standing far off to the side in terror while proclaiming that he wasn't ready for this and he didn't understand why "it looked like that." Schumer's character was having none of it, of course, and shouted at him, "You're not a man!" The hectic scene was a far cry from the idyllic breakfast that started off the trip down memory lane.

In the present, Schumer's character continued to tell the pleasantly false story of her son's birth, claiming that it only took one little push before she had the most beautiful baby in her arms. In reality, the doctor was late, Schumer's character had to contend with pooping during delivery, and neither new parent understood why their baby looked so strange and discolored. However, Schumer told her son that it was the best day of her life and every day after was even better than the one that came before — including the day her newborn peed on her face, some painful breastfeeding mishaps, and not getting more than a minute to herself at a time.

The skit ended by showing that the tougher parts of being a mom never quite stopped. Even though her son was growing up, Schumer still had to clean up a late night accident on Mother's Day because he didn't want Dad to do it; it was a special gift just for mom, apparently. There was a placard to thank all moms for making it look easy, which seemed especially necessary after seeing the real trials of motherhood and giving birth firsthand. And in not sugarcoating things, SNL was relatable enough that many moms were probably laughing in solidarity.