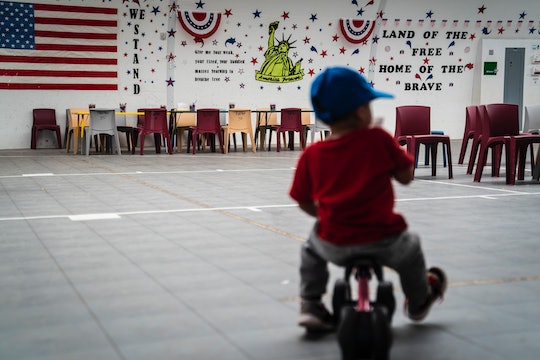 ICE Is Reportedly Asking Detained Parents: Would You Let Your Child Go Free — Without You?

In May, a mother in Dilley, Texas, was asked a question that no mother should ever have to answer.

Ever since she sought asylum in the United States, the mother and her 3-year-old child have been incarcerated. On August 13, the family will have been in detention for a full year, according to the mother’s lawyer, Shay Fluharty, who spoke to Romper.

Right now, the mother is watching her toddler grow up in jail. The child is physically and mentally broken. Ever since the pandemic began, the mother has been relegated to sporadic, limited interactions with her pro bono lawyer on the phone. She fears contracting COVID-19, not only for the health implications, but also because it would isolate her from other detainees for weeks, further cutting her off from information.

That day in May, without an attorney present, the mother was asked to sign a form with the following question, paraphrased here:

Would you give consent to let your child go free without you?

All of the mothers in Dilley were asked the same question in a fashioned trailer courthouse. The question was also asked in Karnes, a facility in Karnes City, Texas, according to Andrea Meza, director of Family Detention Services at RAICES, who spoke with Romper. Children are also being detained at Berks facility in Pennsylvania, where families were recently denied release in spite of the outbreak.

The July 17 episode of “This American Life” interviewed a different mother in Dilley under the pseudonym Yiret, who has an 8-year-old son. Yiret was simply told by an Immigrations and Customs Enforcement (ICE) officer: "We need a signature from you guys.”

She told “This American Life”: “He didn't say separate, but we're not dumb.”

In the episode, ICE officials told Yiret that her son would be safer away from the detention facilities and the virus. The parents banded together and did not sign. Their decision could mean further detention and trauma for their children. But the question terrified everybody, including the children in Dilley according to Fluharty. Family separation was a looming possibility, again.

In 2018, Americans raged when they heard the cries of children who had been ripped from their parents’ arms at the Mexico-U.S. border under Trump’s “zero-tolerance” immigration policy. Family separation was legally halted by a federal judge in June 2018, thanks in part to the public outcry. However, separation policies continued to operate. The Trump administration separated more than 5,400 children from their parents from July 2017 to October 2019, according to numbers tallied by the American Civil Liberties Union. Six children are known to have died in custody after a decade of no such deaths. It is a humanitarian disaster.

Then, in 2020, everything got worse. COVID-19 has spread throughout detention centers, with 4,038 cases reported by ICE to August 3, while the pandemic and clashes over police brutality have put the border crisis on the backburner in the American consciousness. Meanwhile, thousands of detainees have been infected.

Recently, a tinge of hope was conjured and then dashed. In June, Judge Dolly Gee of the Central District of California ruled that the American detention centers were dangerous for children and ordered all children who had been in custody more than 20 days released by July 17, either with their parents or other suitable guardians with parental consent.

The deadline passed. Nothing. The deadline was postponed to July 27. Yet, the roughly 124 children in custody have not been released. Dozens of families are still pouring into the U.S. detention centers and into Trump’s legally murky, unsafe U.S. Migrant Protection Protocols program, aka the “Remain in Mexico” program, on the Mexico side of the border. A vast majority of the detained families at Karnes facility are Haitian according to RAICES.

Every time this request has come up, it's the family that asks for it. It should never be chosen by the government.

ICE, which is taxpayer-funded, has increased its spending from $3.3 billion in 2003 to $8.4 billion in 2020, according to the Department of Homeland Security Budget. Its greatest expense is housing detained immigrants.

The delay is not logistical. Asylum seekers are not considered a flight risk nor a threat by immigration experts. ICE has released complete families together in the past, even under Trump. Typically, released detainees go to their family members’ homes in the U.S., according to Meza. Or, they enter sponsorship programs, shelters or ICE’s Alternative-to-Detention programs, which include ankle monitoring or home visits. Some families have been released after interviews with asylum offices, says Meza.

“The fact that they’re releasing people with interviews just further undermines [ICE]. You're releasing some families, so clearly you can do it,” says Meza. “These [migrants] are people who traveled all across the world to get here. There’s a lot of racism that’s inherently tied to this narrative of ‘oh, what do we do with them while they roam around the country?’ With services, they will be fine.”

The delay is instead due to ICE’s legal roadblocks and deliberate inaction.

ICE exploited the fact that the California ruling had jurisdiction only over the children in detention under the 1997 Flores Agreement. The agency could have used its sweeping legal authority to release the families together, according to Meza, who cited federal regulation 8 CFR 1236.3 which stipulates that incarcerated juveniles and parents can be released simultaneously on a “discretionary, case-by-case basis.”

Instead, the agency posed the Sophie’s Choice-esque question to detained parents: allow us to release your kids without you, or stay in prison as a family.

“[The ultimatum] exists and it doesn’t at the same time, because ICE has not released any information or numbers of people who are seeing this question,” says Meza. “It's important to note that ICE is choosing to put people through these processes in the middle of a pandemic… they pretend like they're backed into a corner.”

One attorney, Peter Schey, has been criticized by other immigration attorneys working on Flores cases for voicing his support for the question, saying that many of his clients would rather have the option to release their children to legal guardians.

Meza argues that while some parents have asked for their children to be released in this manner, ICE’s methods of imposing this question without an attorney present is coercive, not to mention traumatizing.

“Every time this request has come up, it's the family that asks for it. It should never be chosen by the government,” says Meza. “Parents know what's best for their kids. It's in a sense disgusting that there are positions out there that the government should be asking everyone about this.”

Furthermore, ICE did not receive the mass consent from the parents that it was seeking, according to Meza. As far as RAICES knows, all of the parents said no.

This put the agency in contravention of Judge Gee’s ruling to release the children.

“Democracy is barely hanging on, and we’ve been relying on the federal judges to uphold the constitution and constitutional rights and protections,” says Kate Lincoln-Goldfinch, an attorney whose firm represented migrant parents facing separation at the T. Don Hutto Residential Center before the pandemic. “The Trump administration is not following the orders of the judicial branch, which is the first step in the crumbling of our democracy.”

ICE has refused to speak to media time and again. In response to questions from Romper, ICE responded via email: “From an ICE spokesperson — Due to pending litigation, ICE is unable to comment.” Upon request, ICE refused to divulge the name and position of their spokesperson, which is usual for a public, taxpayer-supported entity.

According to Fluharty, the lack of transparency, the tortuous detention for migrant families, the dashed hopes and never-ending legal battles are part of ICE’s deliberately opaque strategy to deter migrants from trying to enter the country legally.

“The government is using things like indefinite detention or family separation to break people down and ultimately lead them to abandon their claims for asylum and perhaps give up,” says Fluharty.

Activists, immigration lawyers and at least one former ICE official who spoke with NBC’s Jacob Soboroff believe that, at the heart of it, the delay is based in unconscionable cruelty.

“This is all planned and premeditated, and [the Trump administration] knew exactly how this would play out,” says Lincoln-Goldfinch. “The only thing they may not have anticipated was public outcry about family separation.”

Gee has since deemed her June ruling “unenforceable” by the July 27 deadline due to ICE’s inability to acquire parental consent, leaving the families in legal limbo.

In July, RAICES filed a complaint to the Department of Homeland Security to release the parents from custody due to inadequate health care at the centers. At least seven children and 14 adults have been confirmed to have tested positive for COVID-19, according to the complaint, although the self-administered testing methods in the facilities have been sharply criticized as inaccurate. U.S. District Judge James E. Boasberg denied the complaint, saying that ICE has provided masks, disinfected surfaces and isolated infected parties in detention, though he conceded that ICE “continues to fall short of full compliance with its policies in practice.”

In another policy thread, Trump has fast-tracked deportation without due process. The policy is currently being challenged by nonprofit immigration groups in the D.C. District Court of Appeals.

“It’s hard for me to keep up and it’s my job,” says Lincoln-Goldfinch. “I can only imagine for the rest of the American public, to stay up to date is difficult enough if there’s not a pandemic going on.”

When asked if a change in administration would turn the tides during the 2020 election, Fluharty wasn’t sure.

“Horrible is relative, and neither the Trump nor Obama administration has done right by these people,” said Fluharty, who mentioned that President Barack Obama was the first to introduce family detention to curb asylum requests. “I do think our government has learned quite a lot since. I just hope that we don’t have to wait until a mother and a child dies from COVID-19, or that families feel no other option but to separate from their children for people to know that what we fought against in 2018 is happening again.”

The mother in the Dilley detention facility doesn’t know about all of these political and judicial jousts. She can only wait and worry as her child approaches their one-year anniversary in detention.

The damage that America has done to her child, and is currently doing to her child, comprises Type III trauma, a form of trauma with lifelong and neurological impacts, studies such as this 2018 BMJ Paediatrics Open paper have found. Incarcerated and separated children face a lifetime of attachment disorders, toxic stress, and trauma, a continuum of distress that settles into a disaffect of “fear without resolution” once attachment to the parent has been severed. Yet, the intense public outrage has all but disappeared.

“It’s perhaps accessible for a mother to imagine being ripped away from their child. That’s a human experience most people can understand,” says Fluharty. “It’s difficult to imagine what it’s like to have your daughter speak her first words in jail or have a quinceañera in detention. People are waiting for family separation to happen to be outraged, but detention is causing harm right now.”

Meza suggested that sympathetic Americans call their representatives to demand that ICE release the families together. She also suggested helping local organizations that are aiding migrant families. Mothers may be interested in Sueños Sin Fronteras, for example, which provides reproductive health services to women on the border.

Lincoln-Goldfinch says that while we may be able to change course, America is forever tainted.

“Family separation, the remain-in-Mexico program and family detention are going to put a stain for hundreds of years on our country for the way that we failed once again to protect migrants.”