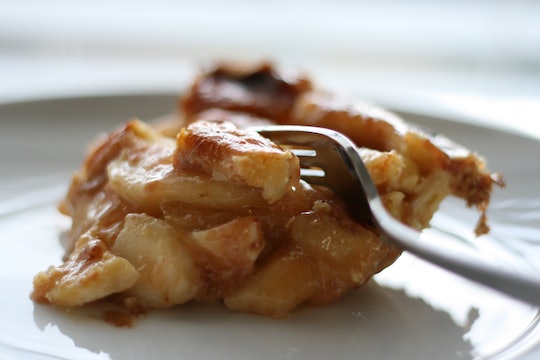 The Difference Between Sugar In Fresh Apples and Apple Pie (No, They Aren’t The Same)

I spend a lot of time schooling my 6-year-old kid on the realities of sugar — partly because the documentary Fed Up was a big eye-opener, and partly because, if left to his own devices, his entire diet would be based in sugary sweetness. And not just from refined sugar! He devours fruit and carbs like an animal, and sugar is sugar no matter where it’s coming from. But there has to be a difference, right? Take the kitchen baker’s staple, apple pie. What’s the difference between the sugar in apple pie and the sugar in an actual apple?

“The molecular structure and composition of sugar molecules is the same no matter where they come from,” Joy Dubost, a nutritionist and food scientist, told The Huffington Post. According to Dubost, all sugar is made of fructose and glucose, and the ratios are pretty similar in both fruit sugar and table sugar. “Neither type of sugar is better or worse for you, but your body processes them differently. Fructose breaks down in your liver and doesn’t provide an insulin response. Glucose starts to break down in the stomach and requires the release of insulin into the bloodstream to be metabolized correctly.” Apples, for instance, are 65 percent fructose, while table sugar (or sucrose) is 50 percent fructose, according to Dubost. So when it comes to apple pie, which typically has added table sugar along with fruit sugar, there’s a higher percentage of glucose than the standard straight-from-the-tree apple.

But let’s break it down — 1 cup of chopped apples contains 13 grams of sugar, whereas one serving of the standard Betty Crocker apple pie recipe has 23 grams of sugar. And that's not only from the apples, but from the added white sugar in the filling. Even in no-sugar-added apple pie — which uses unsweetened orange juice as a sweetener — there’s a whopping 30 grams of sugar in a single serving. (Just another example proving fruit juice, especially orange juice, is just as bad for you as soda. Don’t be fooled!)

And yet there’s an even bigger reason why apples are undeniably healthier than a slice of warm, gooey apple pie. When you eat an apple, you’re also getting vitamins, water, and a boost of antioxidants — along with a substantial amount of fiber. That fiber helps slow down your body’s digestion, meaning the naturally occurring glucose won’t immediately dump into your stomach, causing a spike in insulin. The fiber also gives your body more time to use the sugar as fuel before turning it into fat.

But here’s the kicker. More than half of the fiber in apples is found in the skin, along with the majority of vitamins and antioxidants. Considering virtually every apple pie recipe on earth calls for peeled apples, you’re basically throwing the good stuff in the trash before cooking down the apples in a sugary filling. Sure you can boost fiber in your pie with whole-wheat flour, but it certainly won’t make up for the lost fiber sitting in your garbage can.