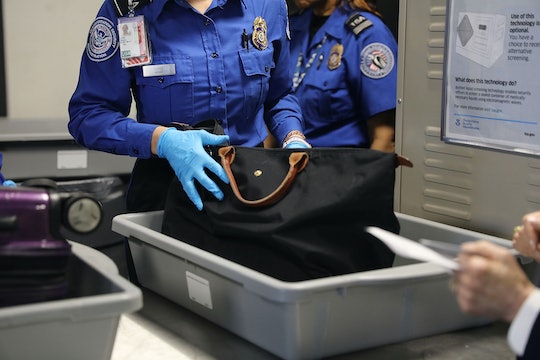 There's a good reason why frequent and thorough handwashing is always touted as one of the best ways to prevent getting sick — germs and viruses are all around us, and can easily enter the body when you touch a contaminated surface, and then touch your face. But while most people know to wash their hands in obviously-icky places, like the bathroom, it might be surprising to realize just how gross other seemingly-harmless everyday items really are. A recent study, for example, found that the plastic trays at security are the dirtiest things at the airport, and that they're much dirtier than the things we *think* are disgusting, like the toilet seats in the airport bathrooms (bleurgh). But since pretty much no one can escape air travel without getting stuck leaving their phone or laptop in one of the bins to be screened by TSA agents? The findings suggest that the first thing all travellers should probably do as soon as they get through security is wash their hands pronto.

In the study, researchers from the University of Nottingham in the UK, and the Finnish National Institute for Health and Welfare in Finland assessed the germ levels on a variety of frequently-touched surfaces at Finland's Helsinki-Vantaa airport, according to CNN. And, well, let's just say that the number of surfaces found to be even dirtier than a toilet seat is the stuff that germaphobe nightmares are made of.

The study specifically looked at respiratory viruses, including rhinovirus (the cause of the common cold), and influenza, and was part of a research project designed to look at "the role of airports and other traffic hubs in the spread of serious infections," including possible flu pandemics. But while that might be important work (anything that can reduce the likelihood of a huge global flu outbreak is welcome news!), it's a pretty unsettling reminder that most public places are totally disgusting.

Some of the worst offenders in the study, for example, were things most people touch all the time without a second thought. In addition to the thoroughly-icky security trays, researchers found a high concentration of viruses on payment terminals in airport stores, on staircase rails, on passport checking counters, in children’s play areas, and, unfortunately, in the air.

If you're a parent, you're probably not surprised to that the airport play areas are more or less virus incubators (though, to be fair, they're also total life-savers when you're travelling with kids, so, pros and cons). And, well, there isn't a whole lot that can necessarily be done about viruses in the air. But the takeaway from the study is that shared surfaces — like railings and counters — in crowded, high-traffic areas such as airports get touched a lot, and that makes them prime sources of contamination.

The study shouldn't necessarily scare travellers, but Jonathan Van Tram, Professor of Health Protection at the University of Nottingham School of Medicine said that the results "[support] the case for improved public awareness of how viral infections spread." They can also serve as a reminder that hand washing is super important to stay healthy, as are things like coughing or sneezing "into a handkerchief, tissue or sleeve at all times."

You're not exactly safe once you get on the plane itself, though. In addition to simply being stuck in such close proximity to strangers, passengers are exposed to all sorts of germs while flying. The worst offender, according to a 2015 study by TravelMath, is actually the folding tray table, which "had more than eight times the amount of bacteria per square inch than the lavatory flush buttons," according to TIME, though the seat belts, air vents, and seat-back pockets also get an honorary mention for being super gross.

Of course, going out anywhere in public pretty much means risking germ exposure, and for most people, it's usually not a huge deal. But since no one ever likes getting sick — and since viruses can spread so easily — it's always valuable to be reminded that washing your hands (and using hand sanitizer or disinfecting wipes when needed) is a good idea. Especially if you happen to be at the airport.