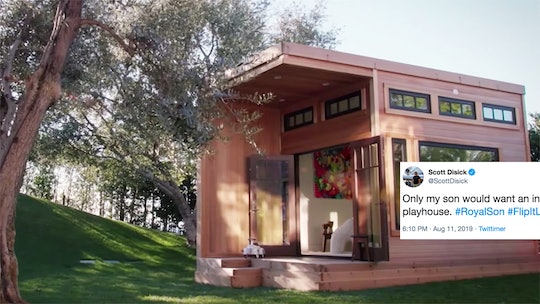 Real Talk: The Disick Kids' $100,000 Playhouse Might Make You Cry Tears Of Jealousy

If you're a fan of Kar-Jenners, then you're probably well aware of Scott Disick's transformation from a man-about-town to a hands-on dad. Gone are the days of Disick jetting off to Las Vegas for club appearances and parties, as Kourtney Kardashian's ex and the father of three is all about #DadLife these days. Oh, and get this — Disick even built something incredibly special just for his kiddos, proving that he is a changed man. In fact, the Disick kids' playhouse is so nice that it might make you cry tears of jealousy.

Okay, that last part might be a bit of a stretch. But trust me, this playhouse is pretty darn epic. On the Sunday, Aug. 11 episode of Flip It Like Disick, the real estate entrepreneur discussed the inspiration behind his vision for the playhouse, recalling a building in Mexico that utilized different types of wood to form one structure. “I want to basically do the same with this playhouse, in the backyard,” he explained, according to People.

While pitching the idea to Kardashian — because the playhouse was actually built for their children, Mason, 9, Penelope, 7, and Reign, 4, on her own property — Disick explained his grand vision for the venture. “A guest house for the kids. Like a tree house, but more luxurious. But cool [and] modern, with nice fixtures and hardwood floors.”

In a confessional, he added, “I’m gonna try to build the most extravagant kids’ playhouse you’ve ever seen."

I don't want to give away all of the details just yet, but I think it's safe to say Disick delivered on his promise.

The shots of the playhouse quickly flew by in the episode recap, so let's take a closer look, shall we? The front of the structure, instance, looks like it could he a nifty tiny house for a single person or even a couple. Paging Tiny House Hunters, anyone?

Oh, and have you seen the house's gorgeous wood? Reign picked out the wood, choosing the same option as his dad.

"I mean, like father, like son. Reign picks out the Ipe," Disick said, according to E! News. "Must be in the family having good taste."

The recessed lighting is a nice touch, too.

And I'm actually super jealous of the cozy-looking loft the Disick kids have going on in there. Can I borrow this space for a weekend and just watch Netflix all day? Or read a book? Or just sit in silence without someone saying "mommy" every 2 minutes? A mom can dream.

But wait, that's not all — as the Daily Mail reported, the playhouse even has central air and an intercom for Mason's sushi deliveries. And given the luxurious perks, it's not too surprising the project cost "upwards of $100,000," as Disick revealed during Sunday's episode, according to the Daily Mail. Of course, it's worth pointing out here some family homes cost $100,000 or less. Oy.

Disick was more than pleased with the finished product, stating, "It's like their own little miniature mansion parked in back of their house," while Mason said, "It's lit."

Speaking of Mason, Disick seemed pretty impressed with his sushi request. "Only my son would want an intercom for sushi in his playhouse," he joked on Twitter.

In the episode, Disick also opened up about how far he's come since his days of addiction, depression, and wild partying. "I feel like years ago, when I was younger and stuff, I don't know that I would have been motivated to do all these things for the kids, and build houses for them," he said to Kardashian. "I was just so insecure that everybody would look at me, like I'm not cool or young anymore. Now, I couldn't be happier. But I’ll be honest: I would have never imagined driving the kids to school and stuff.”

Disick added, "Now that it’s part of life and, like, they want me to be there, I’m happy to be there. You know what I mean?"

I love that Scott Disick is finally getting into this whole dad business. The kids' playhouse is incredible (for $100,000, it should be) and I'm sure Mason, Penelope, and Reign will make amazing memories together in their luxurious new hangout. Color me jealous.