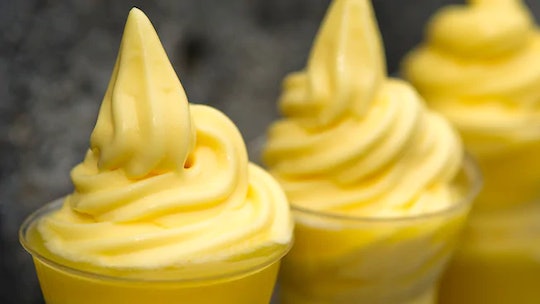 There is perhaps no more famous Disney Treat than their classic Dole Whip. With all the parks closed right now, Disney understands that millions of people will be missing out on their favorite treat, so they sent out a recipe for how to make Disney's Dole Whip via their Disney Parks app.

The recipe is way more simple than the delicious drink would have you believe. According to the Disney app, the recipe is as follows:

Then add the ingredients to a blender and blend until smooth. Make a swirl, and serve.

Now I don't know about you, but my "big scoop" of ice cream is somewhat massive, so I would suggest using a bit larger than the average half-cup scoop, or about two-thirds of a cup of vanilla ice cream.

For the grown-ups in the room, I would say you could make this where you substitute half of the pineapple juice (or all of it) for a pineapple rum or pineapple vodka. (Ciroc makes a delicious pineapple vodka that's also so good blended with coconut ice cream.)

If you don't have frozen pineapple, I would put canned or fresh pineapple with some of the juice in ice cube trays and freeze them until they are almost frozen and then blend.

People have been clamoring for this recipe for years. Blogs have come up with their own versions, but no one knew for sure. Now that we know, it's almost anti-climactic, isn't it? It's just so darned simple. Ice cream, juice, and pineapple. No fairy dust, no weird magical ingredient that makes them all come together to create the fluffy froth — just simple, everyday delights.

The real question I want answered is which brand of vanilla ice cream should I be using? My favorite by a mile is Dreyer's French Vanilla, but that is really heavy on the vanilla. Should I go with a milder vanilla, like Turkey Hill's vanilla or even Target's Market Pantry brand? This will take some level of experimentation, but I have nothing but time and an empty stomach.

I'll let you know how the vodka whip turns out later.