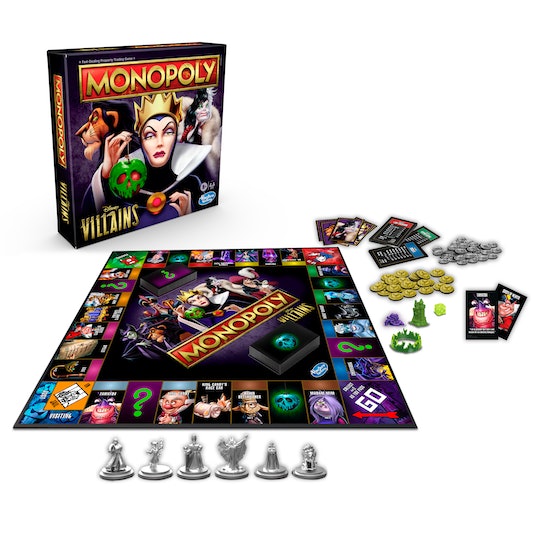 I'll be honest with you: I grew up in a big family, and we had a dynamic not unlike a Disney film. There was the hero, the villain, and me, the real evil one who fooled the rest. That's perhaps why I love the new Disney Villains Monopoly game. It meshes my personality with my love of board games in a beautiful, devious manner.

Now I know what you're thinking. An evil Monopoly game sounds a little redundant. And you'd be right, but remember, this OG board game that makes grown men weep has lived through several incarnations already. This one just matches the actual idea of the game with the most accuracy. (Ideations of world domination means you're the bad guy.) Hasbro has taken the greatest foils of Disney and given them their due in the new Disney villains Monopoly that retails for only $30 and is available now on Amazon.

The game board is actually quite stunning, and the player pieces are so intricate and well done. Monopoly has come a long way from the thimble, I must say. Players can play as Cruella, Jafar, Scar, Evil Queen, Maleficent, or Hook, and use them to play poison apple cards, which allow players to steal, and give them flames of power or villain contracts. The whole thing is sort of ludicrous, but in the best way possible.

The strange thing I really love about this game is not that it's themed after villains or the beauty of the board — it's the creative nature of the game. Monopoly is a great game on its own, but it tends to be all strategy and no creativity. It's formulaic, and you're basically a good player or a bad player depending on your ability to work through the perils of capitalism. With this, there's room for interpretation and fun. You might not win outright, but the game isn't just "Who can best who and trample them mercilessly." Instead it's, "How can I trick this person with the most flair?"

Seriously, Hades has his own square and it's a few down from Ursula. If I were a villain, I'd obviously be one of the blue ones, so this will be the side of the board where I make my power moves. Set me on fire with flames of power, kids, because I'm about to show everyone what's up.