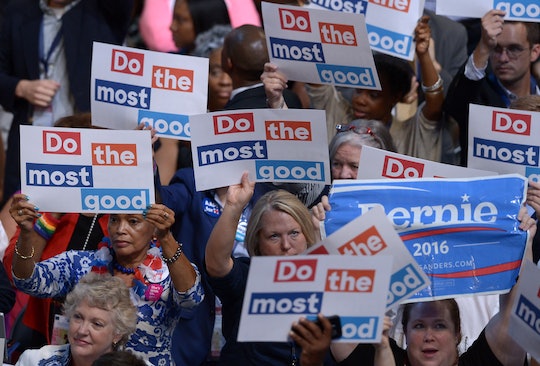 When the Democratic National Convention kicked off on Monday, the headlines and chatter on social media were all about how divided the Democratic party was in its support for Vermont Sen. Bernie Sanders' and former Secretary of State Hillary Clinton. Sanders supporters flooded into Philadelphia and were very vocal about their politics during most of Monday night's speeches. It would have been a good bet to guess that Tuesday's nominating roll call would be just as chaotic. But it wasn't. The DNC roll call vote was surprisingly positive and both candidates got plenty of love, much to (almost) everyone's relief.

Each delegation announced their votes with a preamble about Bernie Sanders' politics and the passion their delegates felt (and feel) for his policies, before then giving the majority of their delegates to Clinton with equal enthusiasm. It was, for anyone who has been watching this nail-biter of a race, an interesting turn of events. In the wake of the DNC leaks, Sanders supporters were (rightly, probably) angered and made their distaste for the DNC known, loud and clear during the roll call. It was unity-ish.

The roll call on Tuesday, after Monday's chaos and protests, was surprisingly peaceful. Clinton and Sanders were still in a tight race, even on the convention floor. It was a strange compromise to watch, since many delegates were obviously still "feeling the Bern," but realized that a vote for Clinton was the way to go. The roll call was cordial and positive and inclusive — many delegates spoke to Sanders' Monday night speech about carrying on the ideas and policies from the campaign, while sort of shrugging their shoulders into voting for Hillary Clinton, and cheering for the first female presidential nominee.

The state of Vermont "passed" from voting at all, until Bernie Sanders stood up, next to his delegates, and asked that all of his votes go to Hillary Clinton. Say what you want about Sanders — it was a bold and brave move. And also necessary to bring the party together to rally around the Hillary Clinton campaign during the general election.

It was a very different vibe from the RNC last week in Cleveland when Texas Sen. Ted Cruz supporters tried to oust Trump as the nominee before getting shut down at the roll call. A day later, Cruz, Trump's former opponent failed to endorse the candidate outright, further segregating the party. Sanders' speech on Monday night and his statement during Tuesday's roll call show that he means business when it comes to advancing Democratic party policies.

Clinton might be the Democratic nominee, but there is still a lot to be done if her supporters want to see her elected. The love for Bernie Sanders was strong in Philadelphia. Keeping Bernie Sanders, his ideas, and his supporters around for the general election and beyond would be a good move.