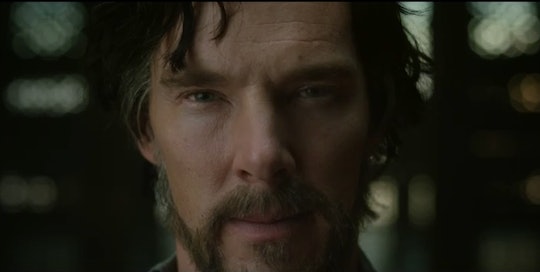 It may have taken longer than expected, but the Doctor Strange trailer is finally here — and it looks like it was worth the wait. According to Us Weekly, Benedict Cumberbatch plays the title character in the new Marvel film, and unsurprisingly, he seems to perfectly embody the injured-surgeon-turned-Sorcerer-Supreme. But he's not the only big name in the cast: Rachel McAdams joins Cumberbatch as a fellow surgeon in the film, and the insanely talented Tilda Swinton nails the all-important role of Doctor Strange's eventual mystical mentor, The Ancient One (a role which initially was supposed to be played by a man, until, I imagine, they remembered that there is no role that Tilda Swinton cannot play better than anyone else regardless of gender).

Judging by the trailer, the film appears to be filled with mind-bending scenes that feel like a cross between Inception and The Matrix. In other words, Cumberbatch really wasn't exaggerating when he told Entertainment Weekly ahead of the trailer's release that "there’s going to be crazy sh*t going on," in the film (um, yep, accurate!). The trailer itself explains Doctor Strange's journey from a seriously injured man looking for answers and healing, to someone realizing that the world as he knows it is not what it seems. As The Ancient One tells Doctor Strange in the trailer,

You’re a man looking at the world through a keyhole. You’ve spent your life trying to widen it. Your work saved the lives of thousands. What if I told you that reality is one of many?

The film, of course, is based on the character that first debuted in Marvel comics in the '60s. In 2012, IGN named Doctor Strange No. 33 of the Top 50 Avengers, noting that the mix of psychedelic, supernatural elements coupled with Stephen Strange's relatability as "simply a mortal man trying to atone for years of selfish behavior," makes him totally intriguing.

But when it came time to finally make the film, Marvel suggested that Doctor Strange wouldn't necessarily be the kind of film fans would expect, according to Cinema Blend. In fact, Swinton herself commented on Doctor Strange's uniqueness, telling Screen Crush,

But, one surprising thing that hasn't yet been mentioned about the trailer? How unexpectedly dreamy Benedict Cumberbatch looks with a beard. Now, if only he'd have stuck with his British accent. Swoon.

Doctor Strange will hit North American theaters on Nov. 4, 2016, according to Cinema Blend.