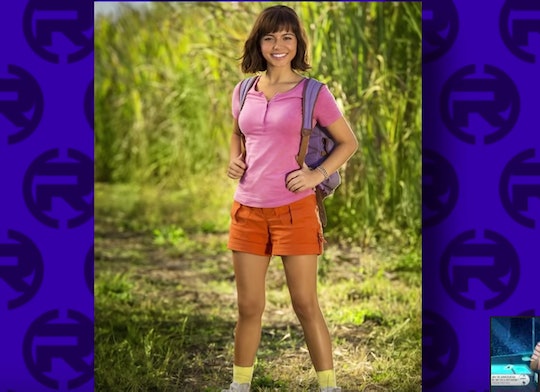 I don't know about you, but when I first heard a live-action Dora the Explorer movie was in the works, I was left scratching my head. "How, exactly is that going to work?" I thought to myself, quickly followed by, "What is the obsession with making childhood classics into live action films?" The Jungle Book, The Lion King, Dumbo, and now his beloved Nickelodeon character? I wasn't sold on the idea at all — until I got a glimpse of it for myself. Because honestly, the Dora the Explorer live-action movie trailer probably isn't what you expected.

The very first trailer for Dora and the Lost City of Gold dropped on Nickelodeon on Saturday, March 23 — during the Kids' Choice Awards, ComicBook.com reported. The trailer offers a 2-and-a-half-minute glimpse into Dora's life as a teenager. From the looks of it, Dora will be heading into the city, where she will embark on a completely new adventure: high school. There, she meets up with her cousin Diego — before apparently being kidnapped and taken to the jungle, where she and her classmates must save her parents and solve the mystery behind a lost city of gold. (With the help of Boots, Backpack, and Map, of course.) Honestly, the movie looks pretty hilarious. Check out the trailer for yourself!

Technically, this isn't the the first glimpse the world has gotten of the upcoming film. On Thursday, March 21, Nickelodeon and Paramount debuted posters for the live-action film, which revealed both the name of the movie and a first look at the stars, according to Deseret News. In one poster, you can see a teenage Dora facing away with her hands on her hips — along with her trusty friend Backpack and her pet monkey Boots — while she gazes upon a jungle city. "¡Come on, vámonos! Check out the new poster for Dora and the Lost City of Gold, swinging into theatres this summer!," the caption reads. "Don’t miss the trailer when it debuts on the @Nickelodeon Kids’ Choice Awards this Saturday, 3/23 at 8/7c! #DoraMovie."

In the other poster, you get a glimpse of Dora's face. That's because she's glancing over her shoulder while holding her friend, Map. "Hola, Dora. The first poster for Dora and the Lost City of Gold has arrived! #DoraTheMovie," the caption reads. You know, I had a difficult time picturing it at the time. But this poster is actually incredibly convincing.

In May 2018, Isabela Moner was announced as the lead in the upcoming live-action Dora the Explorer movie, Variety reported. Jeffrey Wahlberg, Eugenio Derbez, Eva Longoria, and Michael Peña, according to Deseret News:

I can't say for certain that I'll be taking my brood of four to see Dora and the Lost City of Gold in theater on Aug. 2. (Although a break in movie theater AC during one of the hottest months of the year will probably sound good at that point.) One thing's for sure — this new teaser trailer definitely has me excited to see it one day in the near future.