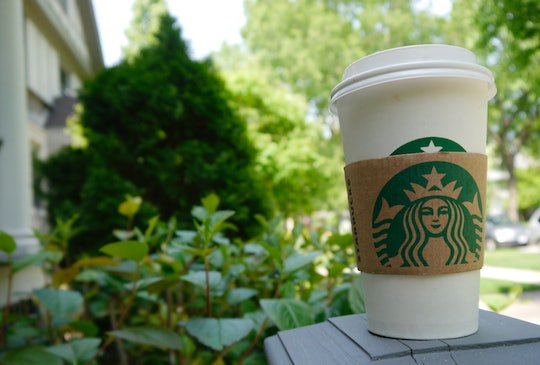 If there's one thing new moms need, it's a good, strong cup of coffee. Between sleep deprivation and recovery from childbirth, there's more than enough exhaustion to go around. If you're breastfeeding and struggling to maintain your supply, then the exhaustion seems to double. To help moms keep their supply and energy going, there is an energy- and milk-boosting drink Starbucks should sell (or, at the very least, add to its customer-created secret menu). I get it Starbucks. You've been busy making mythical drink after mythical drink. But when you're free, there's a drink breastfeeding moms of America (and probably elsewhere — aren't you all over the world?) would be really into.

More Like This
Rachel Zoe Shares 3 Ways To Prep Avocados For Picky Eaters
Restaurant Tips From Parents Of Picky Eaters, Because They Get It
Parents Are Vaccinated, But Still Nervous About Their Kids Getting The Shot
Here's What You Need To Know If (When) Your Baby Eats Sand

In an interview with Parents, Ginger Carney, a lactation consultant, dietitian, and the director of nutrition and lactation services at St. Jude's Children's Research Hospital, said that there's no solid evidence that any specific food or dietary supplement will increase your breast milk supply. That being said, if you doctor or lactation consultant says it's OK, give some galactagogues a try, you never know, right?

First, let's start with the base. Espresso (or coffee) is clearly a must, but what about a milk or milk alternative? I opted for oat milk because, according to Today's Parent, oats, barley, and other whole grains are high in beta-glucan, which may boost prolactin levels, resulting in more milk production. Although brown rice milk will also work both as a potential milk-booster as well as with the rest of the drink's ingredients (and I did try it), oat milk resulted in a far creamier, more indulgent latte. As a regular non-fat latte drinker, I was a big fan. My favorite oat milk brand is Pacific, which makes many different types of alternative milks, as well as packaged soups and other foods.

Coffees and espresso drinks don't have to be sweetened, but they sure taste a little better that way. So the next step to add a (ideally) natural, lactogenic sweetener that would pair well with creamy coffee. According to Just Mommies, dried fruits that are high in calcium, like apricots, dates, and figs, may also boost milk production. With that in mind — and also knowing that dried fruits like those can function as natural sweeteners — I picked up a jar of date syrup at my local grocery store. I was wary that the resulting drink would be too date-heavy, but it was just right.

To finish off my milk boosting latte, I knew I'd need a flavoring of some sort. According to Parents, fenugreek and fennel have both long been considered galactagogues. Although most people don't know what fenugreek (also sometimes labeled as methi seeds) is, I was able to taste and smell it in culinary school. It's often used in artificial maple syrup products to impart a maple flavor, so if you eat too much of it, you'll likely notice a faint maple scent wafting off of you, as well. It's important to note, in regards to fenugreek, that, according to Kelly Mom, those who are allergic to peanuts and chickpeas may also be allergic to fenugreek. Additionally, fenugreek interacts with some drugs (always do your research when it comes to drug interactions) and lowers blood glucose, so those with diabetes should keep an especially close eye on their levels.

Fennel, a root vegetable and also the source of my Italian sausage nightmares as a small child, tastes a bit like licorice. Initially, I thought that I'd be able to grind them both finely enough that they could just be stirred into the drink and stay there, unnoticeable. It quickly became evident that that was just a pipe dream. Instead, I paired the two with ground cardamom to balance it all out, let the spices steep in the coffee or milk , and then strained the mixture to remove the floaty pieces.

I have a milk frother at my disposal, so I decided to put it to good use and froth some milk to add to the top of my latte. A barista I am not, but the milk was frothy and warm, so it was good enough. I composed the drink, mixing the spiced and sweetened milk with espresso and topping it with additional frothy goodness. The result? I, a not-currently-breastfeeding lady, would happily order this particular lactogenic latte. In my opinion, it's best with espresso, but for those without ready access to an espresso machine, gently heated coffee or cold brew works just fine, as well.

So step right up, national coffee chains, and add this sweet and spicy treat to your menu. And breastfeeding moms? I'll see you in line.