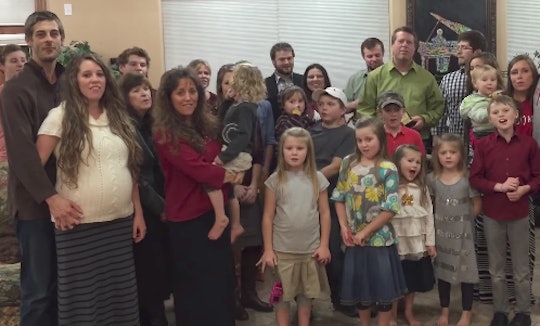 However you might feel about them, it's hard to argue that the Duggars aren't a fairly well-known reality TV family. And because of their relative celebrity status, fans are interested in every aspect of their lives. In particular, because the Duggars are known to be extremely religious, people are super interested in how they celebrate holidays like Christmas, which is rooted in religious tradition. And the Duggars' Christmas traditions show that they definitely do things a little differently in their household than what most families do to celebrate the holiday.

The Duggars are Independent Fundamental Baptists (IFB), a loosely affiliated denomination of Christian fundamentalists, according to Patheos. It's a fairly strict, fundamentalist branch of Christianity that reportedly believes in things like the idea that only men are meant to be the head of the home or church, and that practitioners should avoid "sinful practices and temptations," like movies, dancing, or "any music with an addictive rock beat." It's probably safe to say that the Duggars don't wait all year for new Hallmark Movie Channel holiday movies, and Bruce Springsteen's version of "Santa Claus Is Coming to Town" is almost definitely not on their list of approved holiday tunes.

Because of these beliefs, the Duggars' Christmas traditions sound a little bit different than those of people who raise their kids to be excited for Santa or to watch Rudolph the Red-Nosed Reindeer every year.

In a post written for TLC.com in 2013, Michelle Duggar explained that when it comes to the holidays, the Duggars "do it a bit different in our family." Michelle wrote that early on in their marriage, she and Jim Bob decided they "really wanted to focus on the real meaning of Christmas." In fact, they didn't focus on things like Santa at all with their kids. Michelle explained:

Our goal was to bring out the real meaning of Christmas. It was Christ's day, the holy day of mass, Christ mass and what we're celebrating is the day that Christ was born...Right after Thanksgiving, around the first of December, we begin to prepare and get excited about Christmas day and how we're going to celebrate the coming of Christ and how he came into the world.

And her explanation sounds like it falls right in line with the family's more conservative religious beliefs.

Michelle went on to write that they do decorate for the season, like a lot of families do. But they make it "a big birthday party for Jesus" instead. The Duggars make banners, and put out a "big beautiful nativity" scene. "That's our big emphasis," she wrote.

The Duggars do not have a Christmas tree like a lot of families that celebrate Christmas do, according to a video tour of the house featured on People. Decorating a Christmas tree with my mom was one of my favorite parts of getting ready for Christmas growing up, so that honestly makes me a little sad.

We have fun decorating and baking and doing all that, too, but I hope and pray that my children know that when they come out of our home and start their own homes that the central focus truly was the birth of Christ and how he set the example giving his life, how we in turn should be truly grateful for what Christ gave.

So baking is definitely a part of the holiday season for the Duggars. But they probably don't have a favorite Santa-shaped cookie cutter for the occasion.

Among other Christmas traditions, the Duggars know and sing carols like "Joy to the World," and they send Christmas cards all over the world — as well as receive a ton of them, according to E! News. Actually, one of my personal favorite Christmas traditions is to send holiday cards myself, so maybe I should try to get on the Duggar mailing list this year.

So even if the Duggars may not focus on getting presents from Santa in their household, the super-sized family does celebrate Christmas in their own way, and they definitely have holiday traditions they enjoy. And whether any of the 19 kids want to add Santa into the mix with their own children will be up to them.