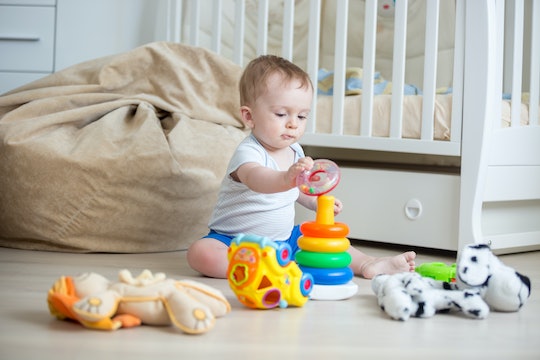 When my son was first diagnosed with autism, a lot became clear. Much of what we thought were his personal quirks and habits were actually what is referred to as a self-stimulatory behavior. They were developed out of his need to cope with his surroundings by controlling some sensory area in his body or in his environment. Colloquially referred to as "stimming," these repetitive actions manifest in myriad ways, and they're easily missed. If you're concerned about your child's behavior, you should know about the early signs of stimming you may be misinterpreting as a quirk or as something that all kids do.

The self-regulatory behavior known as "stimming" begins pretty early in kids with an autism spectrum diagnosis. According to the Centers for Disease Control and Prevention (CDC), it usually begins with the onset of other symptoms, sometime before age 3. In the beginning, noted the CDC, it could be simple repetitive vocalizations, like humming or screeching, or it could be something as seemingly benign as repeating a word or a phrase over and over again.

I know this one floored me. My son used to say "up" all the time. We thought it was adorable. It wasn't until after he was diagnosed that we learned that repeating one word over and over was a type of stimming the CDC refers to as "echolalia."

When my husband and I first decided to get my son evaluated for his developmental delays, we had no idea the long road we'd be on. In the beginning, they couldn't give us a solid diagnosis because even though he had many hallmarks of autism like delayed communication and the inability to express his needs through gesturing or pointing, he was generally the happiest kid you've ever met. Always smiling, always laughing — even though his smiles and laughs came much later than normal children. He even made meaningful eye contact with those to whom he was close.

But what were some of those early signs? I reached out to his diagnosing occupational therapist Anna Ivanova to ask her about the early signs of stimming that I seem to have missed initially. She tells Romper that there are as many types of stimming as there are kids. "While it's all repetitive behavior and action, each kid will have their own stim. Do you remember how [your son] used to stare at the ceiling fan and rub his blanket? That's a stim. So is constantly mouthing objects and their hands after age 3." Ivanova says that many people who aren't autistic have their own stims as well, so it's important that you not look at your child who happens to like watching the ceiling fan and immediately diagnose them with autism in your mind.

"I bite my nails and like to watch videos of people cutting up kinetic sand — it doesn't mean I have autism," she adds, saying that the earliest stims she notices in her practice are usually auditory — grunting, humming, screaming, and children who cover and uncover their ears frequently. "Babies learn to cry before they learn anything else, and they also learn that the sounds they make can block sounds from outside of them." Ivanova says that these types of regulatory behaviors are trying to compensate for their feelings of being overwhelmed with outside stimulation.

She also notes that babies who go on to get diagnosed with autism tend to be obsessed with wheels and spinning objects. "Kids on the spectrum might not play with their cars normally. They'll flip them over onto their backs and spin their wheels, just to watch them spin." They might also stare at their hands as they open and close them, or snap their fingers in front of their face. My son was the king of side eye when he was overwhelmed, and according to Ivanova, that's common. "These are all things that help them control what's going on, what they see, and what they are aware of."

Through the amazing team at Einstein University Hospital's Rose F. Kennedy's Children's evaluation team, and the experts at YAI in Brooklyn, my husband and I learned that, at the very least, our son had a severe communication problem and sensory processing disorder that was initially thought to be the cause of his stimming — which they picked up right away. However, I didn't know that it was a part of their diagnosis until a few years later, when his neurologist and his occupational therapist told me that they were pretty sure my son had autism.

My son, now 10, told me that being autistic is like having everything explode at you all the time. When he bounces up and down — a type of vestibular input stimming, according to North Shore Pediatric Therapy — it allows him to work through things better. It clears his mind. Ivanova says there are tons of ways kids stim, but the one thing that's constant is that they'll do it over and over again, especially when they're anxious, excited, or tired. If you notice that your child is doing this, and you've noticed other red flags, call your pediatrician. The sooner you can have your child evaluated and diagnosed, the better.