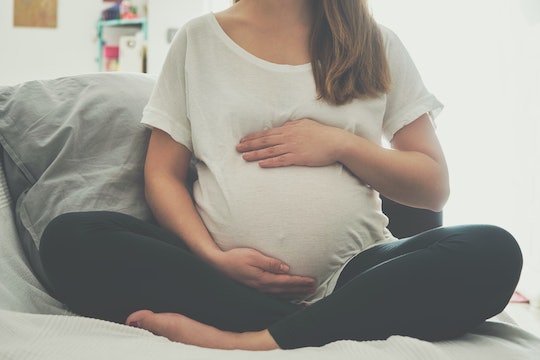 The Easiest Way To Do Kick Counts During Pregnancy

Feeling your baby move is often considered one of the highlights of pregnancy. It's real evidence that your baby is growing and developing. By this point, you may be instructed to monitor your baby's movements regularly by counting kicks, and knowing the easiest way to do kick counts can help you track your baby's progress long before birth.

Why are kick counts important, anyway? According to the American Pregnancy Association (APA), most moms can feel infant movement somewhere around weeks 18 to 25 of pregnancy. By keeping track of these movements, you might be able to tell if your baby experiences any major changes, as further noted by the APA. For instance, if your baby deviates from the normal movement pattern, or drastically reduces the amount of movement overall, you could check in with a physician to make sure everything is OK.

In general, the easiest way to count kicks involves paying close attention to your body. As noted by Sutter Health CPMC, you can lay down at the same time every day, tune in to your body, and count the number of minutes until your baby moves 10 times. These don't have to be earth-shattering kicks, either; soft fluttering movements count, too.

As could be expected, there are a number of ways to make recording these movements easier. For instance, The Bump offers a free kick count chart, as do many other sites. There are even apps, such as Count the Kicks, that help you monitor fetal movements. Whether you decide to use an old notebook, printout, or app, keeping up with the kicks is important.

Of course, it's always a good idea to discuss everything about your infant's health, including kick counts, with your physician. Every pregnancy is different, and these factors can affect your kick counts as well. For instance, some moms with a high risk pregnancy may be instructed to do kick counts as early as week 24, according to the Expectant Mother's Guide. Because of the many variables, it's a good idea to monitor your kick counts under the guidance of a physician. In the meantime, though, sensing all of those swishes and jabs might help you feel closer to your growing baby.

More Like This
A C-Section Actually Doesn't Take As Long As You Think, According To Experts
10 Easy Vegetables To Grow At Home
18 Pregnancy Announcement Ideas Break The Good News To Your Family
The Ultimate Baby Registry Checklist