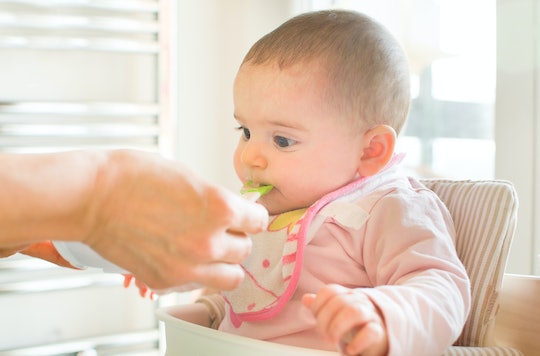 The Easiest Way To Wean Your Baby — Seriously

As amazing, exhausting, healthy, and empowering as breastfeeding can be, there comes a time when it must come to an end. Whether your baby is 6 months old or well into the "extended breastfeeding" age, wondering what is the easiest way to wean is the question on every nursing mom's mind at some point or another.

Like most aspects of raising a child, timing is everything. Each baby is ready to wean at different ages — some earlier and some later than others. Of course, the American Academy of Pediatrics (AAP) recommended breastfeeding exclusively for the first six months of baby's life and then nursing with the introduction of solids until they're a year old. But each family chooses their own way to go about introducing solids and cutting back on nursing, which means weaning rarely looks the same from one family to the next.

According to Parents, learning your baby's cues that they're ready to wean is by far the easiest way to begin the weaning process. Once they've shown an increasing interest in solid food, are old enough to start learning how to chew on their own, and might even show a decreased interest in nursing, you can assume that they're ready to begin cutting back on feedings and gradually increasing solids.

Baby Center recommended you start the weaning process slowly as well. Quitting anything cold turkey is usually much more difficult than gradually doing so over time. The article suggested cutting out one feeding and introducing more solids to start out with and see how that goes. If your baby does well, you can continue to cut out nursing sessions until your baby is eating more solids than breast milk.

Mama Natural — and most other sources — refer to this style of weaning as Baby Led Weaning (BLW) and although there are varying levels of BLW you can try, the approach hinges on letting your baby lead the way, even if their timeline is different than yours.

Although the BLW approach probably isn't the best method for families who need to wean quickly or suddenly which, according to the Mayo Clinic is possible but generally more difficult on both baby and the parents, it is by far the gentlest and easiest way to wean your baby when the time comes.

More Like This
Here’s How Many Calories You Burn When Nursing
10 Ways Breastfeeding Is Good For Moms, Too
20 Weird But Genius Health & Beauty Tools For Babies
Gathre’s Winnie The Pooh Collection Is Finally Here