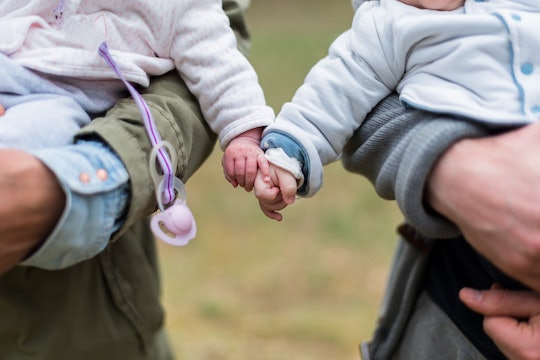 In order to conduct their review, which was released on Wednesday, researchers at the Urban Institute analyzed the effects of paid family leave policies in California (which enacted family leave legislation in 2002) and New Jersey (which did the same in 2008). The programs in each state provide 55 to 67 percent of employees' wages for 10 to 12 weeks after a child's birth.

As it turns out, those wages have made a big difference for new mothers — especially those who need it most. One study found that California's program doubled the use of maternity leave in the state and increased the average length of maternity leave by three to five weeks. It also upped the likelihood of mothers being employed three months before giving birth and nine to 12 months after, suggesting women supported by paid family leave are far more likely to remain in the workforce.

Another study found that California's program also helped reduce new mothers' risk of falling into poverty by contributing to their wages on maternity leave and helping ensure their continued participation in the workforce afterwards. Perhaps most importantly, the positive effects of paid leave seemed to benefit disadvantaged mothers the most. Moms without bachelor's degrees in both New Jersey and California spent more time employed in the time near childbirth, and the overall amount of time they spent job-seeking after giving birth decreased.

The health benefits to moms who take time off after having a baby are myriad: research has shown that time off can help improve breastfeeding outcomes, reduce parental stress, and encourage important parent-child bonding. For moms that can't afford to take time off of work, paid leave is an important aid in allowing them to recover and take time to care for their new arrival.

Luckily, paid family leave policies seem to be spreading to other states. Rhode Island, New York, and the District of Columbia have all passed family-friendly legislation in recent years that has either gone into effect already or will soon, and politicians are increasingly speaking of enacting paid family leave nationwide.

More Like This
New Report Shows 80% Of Pregnancy-Related Deaths Are Preventable
10 Parenting Lessons From Abbott Elementary That You'll Want To Write Down
What Is RSV?
Experts Explain Whether It’s Safe For Your Baby To Sleep On Your Chest