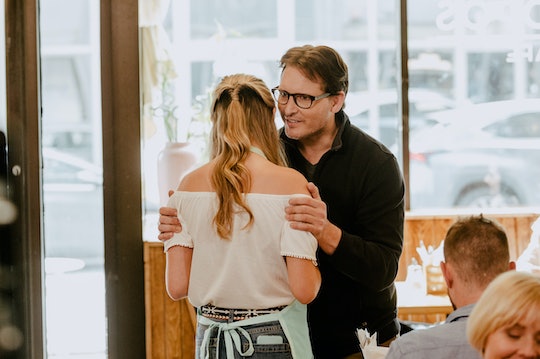 Lifetime is known for its thrilling movies, especially the ones that are ripped straight from the headlines. The network’s latest film was inspired by actress Catherine Oxenberg’s 2018 exposé, Captive: A Mother’s Crusade to Save Her Daughter from a Terrifying Cult, and is based on her family’s real-life experiences. With its big name celebrities, culture of sex slavery, and criminal convictions, the Escaping the NXIVM Cult true story is undoubtedly one of the most disturbing cases to come out of Hollywood.

As described by Lifetime, the movie is centered around Oxenberg and her daughter, India. “When Catherine learns about a leadership seminar from an organization called NXIVM, she decides to take her twenty-year-old daughter India to the professional development meeting,” reads the network description. “Led by the extremely enigmatic Keith Raniere, Catherine can’t shake the feeling there’s more than meets the eye with the self-help organization. Despite Catherine’s best efforts, India is drawn deeper into the cult, and courted by a secret sorority of female members who are branded with the cult leader’s initials, ordered to maintain a restricted diet and told to recruit other women as sex slaves.”

Smallville actress Allison Mack allegedly served as Raniere’s recruiter for NXIVM, reported Rolling Stone, and in April 2019, she pled guilty to charges of racketeering and racketeering conspiracy. In court, Mack admitted that she kept a slave and told group members to perform services for her. As per the report, she also confessed that she asked women who joined NXIVM to give her naked photographs that could later be used as blackmail. After pleading guilty, Mack apologized for her actions, claiming they were a result of her “misguided adherence to Keith Raniere’s teachings.”

After Raniere’s conviction, Oxenberg told People that she felt vindicated, and revealed that her daughter, India, and the other survivors of NXIVM are doing much better now. “I would say for all of the women who’d been through this ordeal, they are not broken and they will be stronger than they were before,” said Oxenberg. “They will be strong and empowered women as a result of this experience. And deeply vindicated because I think that this is going to be a groundbreaking case as far as redefining coercion, and sex trafficking. I really do.”

Oxenberg’s story is terrifying, and the Lifetime movie captures the real fear and danger her daughter and the other victims of NXIVM faced. Escaping The NXIVM Cult: A Mother’s Fight to Save Her Daughter premieres Saturday, Sept. 21 at 8 p.m. ET on Lifetime. And you can see a first-hand account from Oxenberg and others who worked to bring down the cult in Beyond the Headlines: Escaping the NXIVM Cult with Gretchen Carlson, which airs right after the film, at 10 p.m. ET.