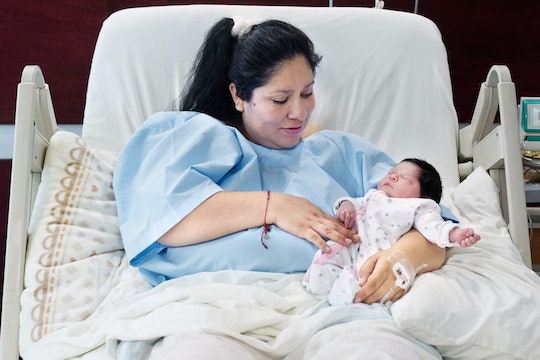 The Expectations Of Perfect Motherhood I Inherited Deserve To Be Tossed

As I think back on my parenting journey, I’ve realized that an unnecessary amount of my identity has been constructed around efforts to be a supermom. I can’t pinpoint exactly when it started. But I can’t help but think a large part of it was triggered by my experience being raised solely by my mother. My mom was a single mother of two on a limited salary. It wasn't always going to be feasible for her to be perfect, so she didn’t try. But the world around me caused me to internalize expectations that kids deserve a best-dressed supermom. And by that standard, I was missing something. It took becoming a mom myself to see that my brother and I weren’t missing out on anything. Instead, I was just a child on the receiving end of messages about what my mom should or shouldn’t have been doing.

Now, I understand that my mom's decision to provide instead of play was her way of giving herself a rest from the demands of motherhood. She wasn’t perfect, but she was definitely effective — which is more than many could say for their parents.

Waiting on my unborn daughter, it’s became clear that I have to develop my own version of putting myself first. Like my mom, I’m cutting corners because being everything the world wants from us is downright insane.

I am a hot mess of a mom. I don't enjoy getting my nails done, and my hair only gets styled because my bedhead afro closely resembles a bird's nest.

He might watch a significant amount of TV. (Don't judge me, when you're a work-from-home mother you find ways to get sh*t done.) But despite high levels of TV, my son is one of the most intelligent as well as one of the most securely attached children you will ever meet.

I like to think the reason my son is often described as having a pleasant disposition is that I have cut out all of the "look at me I'm an awesome mom" routines people take part in. And in its place, I allow him to be a child.

I'm not saying that you can't be glamorous have an awesome child. But in my case, only one goal was worth my attention.

The stuff I see online reveals way too many of us feel pressured to put forth a facade of perfection instead of an image of realistic motherhood.

A leisurely ~scroll~ down your social media timeline will quickly reveal what our society expects of mothers. We expect them to be clean — and we expect that cleanliness to extended their children. We expect them to be fun and creative. We see this in the way so many moms feel the need to upload highlights of every family adventure/brain-boosting activity. The most difficult activity we expect them to perform is keeping it together. We don’t seem to want to see real motherhood.

I never understand why we try so hard to look unchanged.

The social media world continuously showcases “it” moms missing nothing but the cape who parent as fabulously as they look. If you ask me, these images of motherhood send a false message that if you’re doing motherhood right your life will appear unchanged beyond appearing accented by the glow of joyful motherhood.

These pressures come from all around us. Our families and friends, even those mean girls we’re trying to impress from high school — I’m guilty of this, too. Yet of course one of the biggest influences is the presence of famous moms and our obsession with the always ready instamom. What we don’t see, though, is that perfect mom on Instagram displays all of this and she’s miserable.

It seems like we don't have the freedom to make mistakes anymore, when making mistakes is a critical part of our development as parents. It’s hard to crawl past the radar in the world of Snapchat, and Facebook live catching every wedgie or ridiculing every “unkempt” kid.

The world and images around us expect us to appear untouched by pregnancy and motherhood. But we all know that image is a lie. Motherhood changes your body, your career, and often your marriage in so many unexpected ways. I never understand why we try so hard to look unchanged. To balance it all, we have got to embrace shortcuts. It's okay if your child isn't the best dressed in the group. But they can be the nicest.

It's fine with me if my son isn't the most cultured child in the group — if he is the most loving, I'll feel like I've still won.

I don't have all the answers yet. But I've entered this next stage of parenthood knowing that it's unrealistic for me to be everything to either of my children. But more importantly, it's unfair to me. The pressure to look and be perfect is weighing heavily on our mental and often physical health.

In spite of it all, I consider myself happy. And that's more important than following all of the rules or being someone's mom goals on social media.

Let's all say screw the system and run towards carefree authentic motherhood.