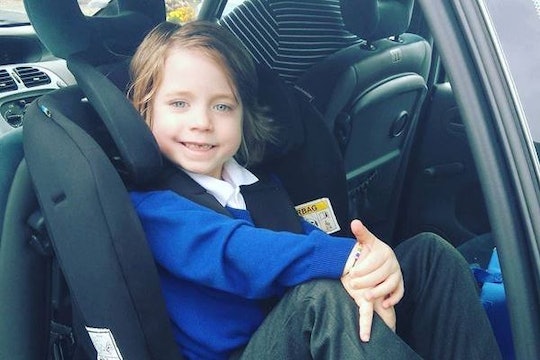 A five-year-old child in a European rear-facing carseat (note that Euro models do not use chest clips). Photo courtesy of Therese Gilbert/A Rear-Facing Family

If you have figured out the right position of the chest strap and/or how to install and remove your kid's car seat, you're pretty much an all-star in the parenting stakes. Navigating the instructions for safe use of car seats is its own special discipline — no puffy clothes! No slack in the straps! Ensure the seat is level! Rear facing until 2 years old! — and, to be honest, sends many of us to the nearest fire station to have someone qualified install it for you. But that last rule turns out to be a little more gray than you might think. Your pediatrician might not have mentioned it, but many moms are choosing to keep their children rear-facing well beyond their second birthday, and they wonder why everyone else isn't doing this.

As most moms, pediatricians, and car seat manufacturers will tell you, the state and federal regulations are simple—keep your kid in a rear-facing car seat until age two or once he or she has surpassed the weight and height measurements designated by that specific car seat’s instruction manual. Easy, right? Not so fast…

More and more parents are buckling their well-over-two-year-old toddlers up rear-faced for the long haul. It’s known as the extended rear-facing (ERF) car-seat movement and it’s coming to a neighborhood near you. Essentially, it’s a push to keep even pre-schoolers rear-facing far longer than the standard two years of age for safety purposes. The Swedes have been doing it for nearly four decades and now the movement has taken on a life of its own in the UK, across Europe and the U.S. As many ERF parents put it: "astronauts do it, so why wouldn't you do it for the safety of your child?"

A study ... found that two-year-olds were five times less likely to be injured riding rear-facing than forward-facing.

But is it really safer? Turns out, yes. There’s plenty of research supporting this, including a 2007 study published in the journal Injury Prevention that found that two-year-olds were five times less likely to be injured riding rear-facing than forward-facing. Another 2009 study, published in the British Medical Journal, found that rear-facing seats are safer than forward-facing seats for children under four years old.

Parents are listening to science, although state and federal recommendations seem slow to change. In 2011, the AAP did update their recommendations from the original one-year milestone to specify that children should remain rear-facing until two years of age or, preferably, until they reach the highest weight and height limits allowed for that car seat. But these incremental guideline enhancements aren’t enough for many moms, dads and caregivers.

When it was time to move her daughter from and infant seat to toddler seat, she kept looking for a normal rear-facing car seat, but couldn’t find one.

That is why Therese Larsen Gilbert, a UK-based, CPD-accredited car seat expert and founder of the Facebook group ERF Mission and blog A Rear Facing Family, became an advocate for extended-rear-facing car seats. When it was time to move her daughter from an infant seat to a toddler seat, she went looking for a rear-facing car seat, but couldn’t find one. This was odd to Gilbert, since rear-facing car seats made for toddlers were common in her native country of Norway. “I realized that, in the UK, children would travel forward-facing from nine months old and that’s obvious not safe, so I had to go to a specialist to find the car seat I was looking for,” she tells Romper.

“I found some nearby parents who were looking for the same thing and created my blog and Facebook group as an informational reach for the UK and Europe in general to explain why rear-facing is the best way to keep them as safe as possible.” Her group, which is just one or many advocating for this issue, has nearly 4,000 followers.

The worst is when I’m told I’m endangering my son by rear-facing him past two.

Though it seems understandable to want to keep your child rear-facing for safety reasons, even up until age four for some, many parents feel the need to defend their decision. “People react like you’re an overprotective mom or like you must be judging their parenting decision,” Laura Q., a mom in New York City, tells Romper by Facebook message. “The worst is when I’m told I’m endangering my son by rear-facing him past two.” As chilling videos of crash simulations show, the opposite is true.

Many of the issues those against the extended rear-facing movement have involve the comfort level of their children. Most picture their two- or three-year-old in a baby seat that is meant to fit into your stroller, but Gilbert explains that extended rear-facing car seats are the same size as an average forward-facing car seat — just facing the other way. People also worry that the child can’t communicate with the driver, but this can be easily solved with the use of a small, plastic mirror.

Additionally, some parents note that there’s more for rear-facing children to see in this position, because they’re able to have a panoramic view of the world around them. “He can look out the [back] window rear-facing also — it's just a different view!” says Jen Wellington of New York City says by Facebook message. “I actually find it fun with mine, hearing how they see the things as the pass.”

Whether you choose to keep your kiddo front-facing or opt for a car seat that allows you to do extended rear-facing is, of course, up to you. But these parents want you to consider the profound difference in safety, which is rarely publicized, and merely requires changing your point of view.

*Note that the car seats pictured are European models, which do not have a chest clip, as required in U.S. car seat models.

More Like This
Can Elderberry Help Prevent Illness In Kids? Doctors Weigh In
Prince George Reportedly Got Sassy In A Fight With A Classmate
16 After-School Snacks For Hangry Kids
Tips For Apple Picking With Kids