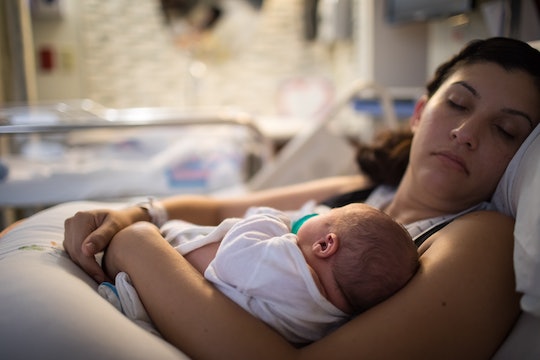 A mother rests with her newborn (Editor's note: Bed-sharing with babies has been linked to a higher risk of SIDS or accidental suffocation.) Getty Images

Turns Out Baby-Friendly Practices Helped No One, Not Even Baby

The pressure to be a good mother starts approximately a minute after your baby is born. That’s when the nurses pop your baby onto your chest so you can nurse.

What they don’t tell you is that you’ll most likely end up with bloody nipples, a baby attached to the boob 24-7, and plenty of struggles at any time of the day to get that baby to latch.

And we’ve got more bad news. A recent study published in The Journal of Pediatrics found that those who deliver in so-called "baby-friendly" hospitals have worse rates of breastfeeding than those without the baby-friendly designation.

It’s the latest knock against the Baby-Friendly Hospital Initiative (BFHI), which was launched by the WHO and UNICEF in 1991 to improve breastfeeding rates. The designation is given to hospitals that follow 10 rules, including rooming-in (babies sleep in the mother’s room only, and not in a nursery), no pacifiers, and no formula unless absolutely necessary. Around 20% of U.S. hospitals participate in the BFHI, according to accreditation organization Baby-Friendly USA.

Kaitlin Corcoran delivered in a Chicago hospital that placed so much emphasis on breastfeeding — even when it wasn’t working — that her baby ended up dehydrated.

After a long labor, Corcoran, a stay-at-home mother, was trying to nurse, but her daughter cried and screamed the entire two days in the recovery room. Nurses refused to give Corcoran a nipple shield.

“[A nurse] had told me about them, but wanted me to keep trying without it,” Corcoran says. “When she finally relented, it was immediate relief for my pain.”

A 2016 clinical report in Pediatrics succinctly noted the risks of baby-friendly practices, including cases of 'near fatal or fatal events related to sleep, suffocation, and falls from adult hospital beds' in facilities promoting rooming in.

The nurses never mentioned formula, and told Corcoran they didn’t have a nursery any longer so she wouldn’t have a break overnight.

“When we were discharged from the hospital, my daughter’s lips were chapped,” Corcoran says. Mother and daughter were crying all the time until a pediatrician insisted she switch to formula.

This all occurred despite the fact that a study by University of California San Francisco researchers suggests that offering formula to stressed-out moms may increase breastfeeding rates because it eases that stress while the women wait for their milk to come in.

But that goes against the baby-friendly hospital rules, says Joel Bass, co-author of the 2019 Journal of Pediatrics study.

In these hospitals, they tell the patient what to do, and it may not be something she wants to do or even thinks she’s capable of doing, Bass says. There’s pressure on the hospital to have the mothers breastfeed, so they don’t offer the option of formula, nor do they allow the women to put the baby in the nursery outside of feedings. At the same time, a 2016 clinical report in Pediatrics succinctly noted the risks of baby-friendly practices, including cases of "near fatal or fatal events related to sleep, suffocation, and falls from adult hospital beds" in facilities promoting rooming in.

Studies such as a small observational study published in the Journal of Perinatal Education in 2017 have noted poor sleep quality where mothers were rooming in after birth; the role sleep deprivation plays in perinatal mood and anxiety disorders has long been established.

"Sleep is essential for psychological wellbeing, including the prevention and treatment of perinatal mood and anxiety disorders (PMADS)," says Alexandra Sacks, M.D., a reproductive psychiatrist and the host of the Motherhood Sessions podcast. "If a mother finds breastfeeding to be stressful and not the right choice for her, then choosing to pump or use formula may be better for her psychological wellbeing and improve her bonding with her baby, which benefits the health of them both."

And yet hundreds of hospitals shut down their baby nurseries to satisfy BFHI requirements.

I, for one, don’t know what I would have done without sending my newborns off to sleep in a nursery so I could get some much needed rest after my long labors. Most likely, I’d have turned to formula, with no energy to attempt to deal with breastfeeding.

“In a baby-friendly hospital, if the mother wants to do this, she’ll be instructed that it’s harmful,” Bass said. “For that reason, it’s not going to have a success, as the mom will feel like she’s failing and that sets up a negative cycle.”

Bass says that while the intentions of these nurses, doctors and hospitals are good, the initiative is not working.

She was struggling with breastfeeding, so the nurses watched her pump while refusing her request for baby formula.

“The lactation consultant was so rude and overbearing, and stormed out when we were getting discharged because I said I had been giving my baby formula,” Corral says. “It completely turned me off.”

We just want you and your baby to be happy, healthy and fed whatever way you choose to do so.

Bass says it would be more helpful if the nurses respected the mother’s decision and helped her feed her baby in any means possible — regardless of whether she wants to breastfeed or give her child formula.

Tamara Ayala, a labor and delivery/postpartum nurse, agrees. She says that about 95% of her patients say they want to breastfeed, but she often wonders how many people truly want to nurse, and how many feel like they have to or that they nurses would judge them if they didn’t.

In the United States, 83% of women start breastfeeding their babies in the hospital, but most stop before the recommended 6-month mark, according to the 2018 Breastfeeding Report Card issued by the Centers for Disease Control and Prevention. At that point, 60% of the babies are still breastfeeding, but only 25% are breastfeeding exclusively.

“I’m here to tell you, we just want you and your baby to be happy, healthy and fed whatever way you choose to do so,” Ayala says.

She totally understands the moms who struggle with nursing, as Ayala breastfed her children until they were three months old, and then she switched to formula because of low supply.

Alexandra Sacks, MD, a reproductive psychiatrist and the host of the Motherhood Sessions podcast

More Like This
These 4 Sleeping Positions Will Keep You Comfortable After A C-Section
Here's The Best Time To Remove Your C-Section Tape
Breaking Down The Different Types Of Postpartum Infections
Can The Way You Sleep Really Turn A Breech Baby?