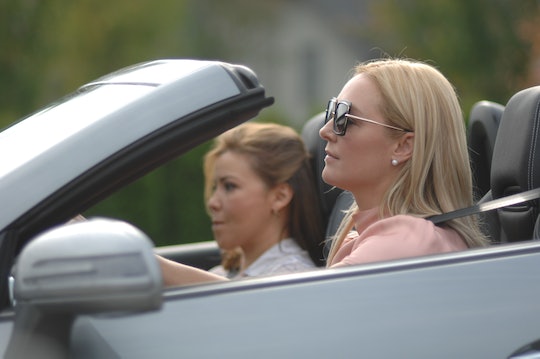 Photo by Courtesy of Lifetime Copyright 2019

If You're A Fan Of Jane Green, You'll Want To Check Out This Lifetime Movie

I'm a big fan of book-to-film adaptations. It's a great way to bring an author's creation to life in a more visceral way. One network who aces the book-to-film situation is Lifetime. An on Saturday, theFamily Pictures book is coming to the small screen, and it's full of all the secrets and drama your heart can handle.

The novel, by bestselling author, Jane Green, follows two strangers, Maggie (Justina Machado) and Sylvie (Elisabeth Röhm), who live on opposite coasts. They have eerily similar lives with husbands who work way too much, and children preparing to leave home to start lives of their own. All is well until the daughters befriend each other on a college tour. Soon, secrets are exposed and lives are upended.

The book came out in 2014 and since then, Green has written a slew of bestsellers translated in 25 languages, with "over ten million books in print worldwide," according to her website. Two of Green's other novels, To Have and to Hold and Tempting Fate, are also part of the network deal. Each were "executive produced by Green, Kim Raver (Grey's Anatomy), Manu Boyer, Jocelyn Freid, David Fleming and Kara Feifer with Boyer directing from a script by written by Ilene Rosenzweig.

Lifetime executive Tanya Lopez told Deadline, “Jane Green’s novels are addictive, fun, juicy, and wise — just like a great Lifetime Movie — so to bring the two genres together is incredibly thrilling." As far as the stellar casting, she added, "With Kim set to direct and Alyssa as the star to kick off the first of the series by Jane, it is the perfect trifecta."

It's hard to say how closely the film will stay true to the book, but it sounds like the basic elements are there. Raver, who is also a fan of Green's work, said in the same Deadline interview, "It’s a dream come true for me and my producing partners to be able to bring these powerful female-centric stories to fruition at Lifetime!" She added how grateful she is to Lopez and LMN for "championing this trilogy" as well allowing Raver the chance to shine in her directorial debut (working alongside her husband, Boyer).

Plenty of books have been adapted into Lifetime movies before, but Family Pictures feels particularly apt, focusing as it does on two women and their potentially life-ruining secrets. Sometimes you just want to watch (or read) something incredibly juicy. and Green's novels are just the ticket whether you consume them in print or on screen on Lifetime. The writing contains all the essential elements of a really good beach read (intrigue, drama, lies), but watching it all unfold through film will hopefully do justice to its main characters, Maggie and Sylvie. The bottom line is, if you're in need of a light novel to get you through the heat of summer days, this book is it.

Family Pictures is the third and final film of the trilogy, set to air Sat., June 29 at 8 p.m. ET on Lifetime.