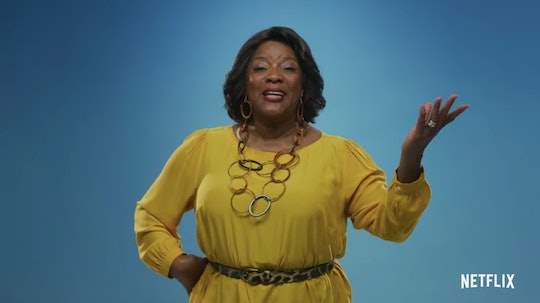 Meet The McKellans In The 'Family Reunion' Trailer

When Family Reunion Part 1 premieres on Netflix on July 10, viewers will be introduced to the McKellan family. They're making a big move from Seattle to Georgia so they can reunite with their relatives (hence the title). But while some changes are difficult to get used to, there's a lot to celebrate in being back together again. And the Family Reunion trailer is undeniably a celebration.

The show stars Tia Mowry as Cocoa McKellan, who heads back to Georgia with her husband Moz (Anthony Alabi) and their four kids after realizing how much she was missing by being away from her family. Loretta Devine co-stars as M'Dear, who promises to be a memorable matriarch in the Part 1 trailer. It opens with her stepping out in front of a blue backdrop, the kind you might see at a photoshoot; the rest of the McKellans are right behind her. They quickly get into a group pose as they prepare to take a picture. "Moz, Cocoa, and the kids moving back home, it's black family magic," M'Dear says to the camera. "We're one big happy family under one big happy roof."

The trailer mixes direct-to-camera declarations with clips from the show while each member of the family shares what black family magic means for them.

Cocoa states that black family magic is being together, but M'Dear says it's also sticking together; Cocoa's youngest daughter adds that it's praying together, too, before it cuts to a clip of her shouting and swooning at church. There's a lot of laughter shared amongst the family, and life lessons too. Cocoa wants tips from M'Dear after seeing her quell complaints from the kids with just one cool look. "It's a gift, baby!" M'Dear proclaims.

Oldest daughter Jade (Talia Jackson) says black family magic is "doing everything with a little bit of attitude," right before a scene from the show in which she pretends not to know her mom in front of her friends. Ah, teenagers. The decades may pass, but they will always snub Mom in front of a crowd!

More definitions follow, describing black family magic in both broad and very specific terms. M'Dear's sweet potato pie (which incites musical moments from guests who try it) counts, though it's something very particular to the McKellans. M'Dear's last offering is that black family magic is snapping peas on the porch while talking — which is, she explains, what she'd call "snapchat." Badum tish.

Both Devine and Mowry shared how excited they were about Family Reunion in statements to Entertainment Tonight. "I am so blessed to be part of this new and exciting moment in time that will touch and bring laughter, smiles and joy to everyone who sees it," Devine said, and both women felt confident that prospective viewers were going to love the show.

It focuses on family above all, which might give quite a few audience members something to relate to. But the lingering impression from the trailer is how positive it is. Family Reunion might give you a new, uplifting series to look forward to on Netflix.