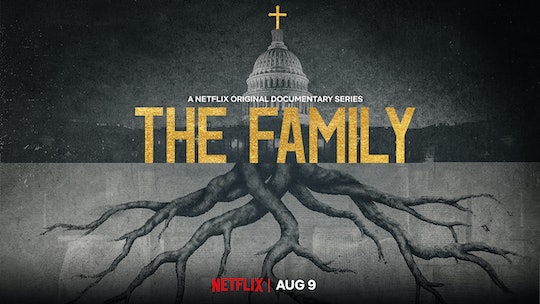 Everything You Know About Politics & Religion Will Change After 'The Family'

Chances are, most of you haven't heard of The Fellowship. The secret Christian organization said to be "hiding in plain sight" is the topic of Netflix's five-part docuseries, The Family. The project examines the secrecy behind the conservative Christian group whose influence reaches Washington, D.C. in pursuit of "its global ambitions." The Family true story might make you think twice about political scandals and the religious organization's influence.

The series is based on Jeff Sharlet's bestselling book, The Family: The Secret Fundamentalism at the Heart of American Power, while Netflix adds visuals (as seen in the trailer) with firsthand accounts of a former member's experience with the organization. The book's author, Sharlet, is an investigative journalist and former associate research scholar at New York University's Center for Religion and Media, and hetaught graduate seminars in journalism and the history of American religion. The guy knows his stuff.

The official Netflix description of The Family reads in part: "Every February, on the first Thursday, at the same hotel, dignitaries and guests from 100 countries gather in America’s capital for a blessing. While more than 3,000 people attend the National Prayer Breakfast — including every U.S. president since Dwight Eisenhower — the host organization has long shrouded itself in secrecy." More ominously still, The Family allegedly believe the separation of church and state is unnecessary, as is political affiliation.

In the trailer you get a sense of how much secretive power The Fellowship may have had over country policy through the years, straight from the members who witnessed it.

The Family shows reenactments of stories told by experts and members about The Fellowship's "involvement in widespread political scandals, the notorious C Street house and investigate how the immensely private organization works with the current administration." More specifically, the series takes a hard look at Associate Director of The Fellowship, Doug Coe, who convened The National Prayer breakfast and was known as an "influential evangelical leader," until his death at age 88. "He's the most powerful man in Washington you've never heard of," a voice says in the trailer.

Sharlet's personal journey and the investigation of The Fellowship's involvement in politics might give you a different perspective on how ingrained religion is in the United Staes' government systems. Sharlet described The Family's religious views to Vox as "nonsectarian, generically evangelical," but their power runs deep. It's so ingrained, evidently, The National Prayer Breakfast has become a "pay to play" event, according to The New York Times. This means foreign dignitaries and lobbyists pay thousands of dollars to get into the event as well as the week of meetings and events surrounding the breakfast. "The annual event has become an international influence-peddling bazaar, where foreign dignitaries, religious leaders, diplomats and lobbyists jockey for access to the highest reaches of American power," the Times article reads, citing, for example, a $220,000 fee to "get to know and converse directly with the President of the U.S." You can see how this may become troublesome. Sharlet's argument is the backdoor recruiting used as a diplomacy tool, so when it comes to policies, there is no formal, government oversight. It's about money and power.

The Family was directed by Jesse Moss and executive produced by Oscar winner Alex Gibney. It dissects the way religious influence effects any political decisions. Does your vote matter? After watching this, I'm not so sure.

If you've never heard of The Fellowship before, Netflix is about to change that. Once you've seen The Family, your views on religion and politics may be forever changed, for better or worse.