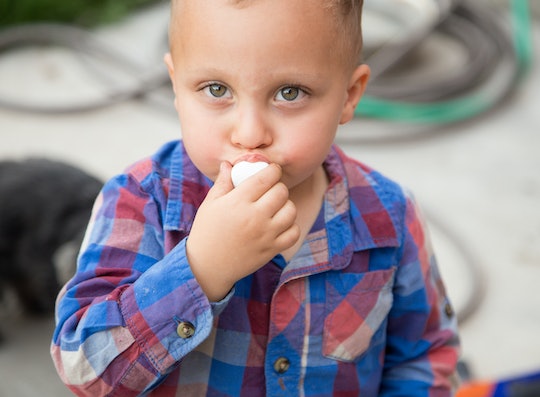 Little kids aren't known for having the best self-control. If yours is particularly bad at, say, waiting to eat a treat, you might be under the impression that they're doomed to a life of poor impulse control, but new research suggests that the infamous "Marshmallow Test" doesn't predict your kid's future success, after all, according to Business Insider. You may be familiar with this test already, but here's a brief refresher: in 1970, Stanford researchers performed an experiment on more than 600 preschoolers. Kids were given a marshmallow (or other treats), and asked to wait 15 or 20 minutes to eat it. If they succeeded, they'd get two treats, instead of one.

The purpose of the original experiment was to determine how different variables affected the kids' ability to wait, like asking them to think about "fun things" as a distraction, or keeping the marshmallow out of view. The results, which were published in the Journal of Personality and Social Psychology, were pretty predictable. But years later, lead author Walter Mischel collected additional data from the original participants, and published another paper claiming that those kids who were able to delay gratification for longer periods grew up to be smarter, healthier, and more emotionally stable than their little cookie monster peers, which scared the heck out of some parents. Mischel's research made it sound as though by the time a child turned 4 years old, their future was set in stone.

But that may not be the case, after all. The original study notes that the participants were all students at a preschool on the Stanford campus, which means the pool was limited to the children of professors and graduate students. In a new study published by the Association for Psychological Science, New York University and University of California, Irvine researchers replicated the test on a more racially and socioeconomically diverse group of more than 900 kids from all across the country. The authors also let the kids choose between a variety of treats, which likely made a big difference, because honestly, I'd wait a year to eat a marshmallow, but leave me alone with a Snickers bar and I might accidentally swallow the wrapper along with it.

The new study found that while kids who waited longer for their treat performed ever so slightly better at math and reading by age 15, "correlation was only half the size of those reported in the original studies and was reduced by two thirds in the presence of controls for family background, early cognitive ability, and the home environment." In other words — and we'd all do well to get this phrase tattooed somewhere on our bodies — correlation does not equal causation.

In fact, when controlling for differences in the participants' cognitive abilities, home environments, and socioeconomic status, researchers discovered that their ability to wait longer for a treat was statistically insignificant. "Just narrowly focusing on this one skill, without taking into consideration the broader elements of a child's life, probably isn't likely to make a big difference down the road, based on our results," lead study author Tyler Watts told Business Insider.

And there are additional flaws with that initial study. Out of 653 original subjects, Mischel was only able to follow up with 185 of them, and those reports of superior cognitive and coping skills among the patient kids were based on a short questionnaire mailed to their parents, which only asked them to compare their kids to their peers on a scale of one to nine. The SAT scores — of which there were only 94 collected — were also self-reported and unverified. As for the more recent claim that the marshmallow test could predict kids' BMI 30 years down the road, that was also based on the self-reported data of just 164 participants, and even Mischel cautioned in his findings, "The study is, however, correlational, and it is therefore not possible to make causal inferences regarding the relation between delay duration and BMI." The bottom line: if your kid can't wait for dessert, it probably just means that they're a kid, not a serial killer in the making.