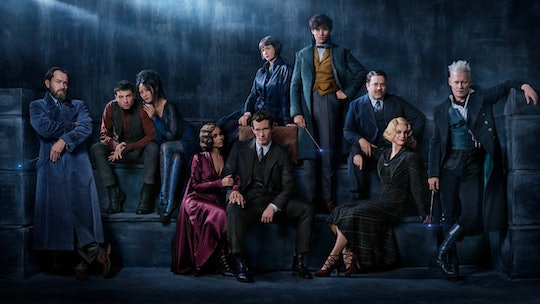 The 'Fantastic Beasts' Sequel Name Is Finally Here, & It's So Epic

If you were able to tear you eyes away from that cast photo for a minute, there's some very important news coming out of the Wizarding World: the Fantastic Beasts sequel name is out, and although it's going to be a bit of a wait, it sounds like it's well worth it. Mark your calendars for Nov. 16, 2018, the premiere of Fantastic Beasts: The Crimes of Grindelwald. Warning: the following contains SPOILERS for previously released Harry Potter books and films. If you're not up to date, proceed with caution.

The title refers to Gellert Grindelwald (Johnny Depp), the dark wizard who we last saw at the end of Fantastic Beasts and Where to Find Them, after it was revealed that he'd been posing as American Auror Percival Graves (Colin Farrell). But that wasn't fans' first introduction to Grindelwald; his back story was an important part of Harry Potter and the Deathly Hallows, as well. It was in that book (or movie, if you prefer) that we learned that Albus Dumbledore, who famously defeated the dark wizard, had actually been quite close to him as a teenager. After being expelled from Durmstrang for being too shady even by their standards, Grindelwald stayed with his great-aunt, Bathilda Bagshot, in Godric's Hollow, where he met the future Hogwarts Headmaster.

It was there that Grindelwald began forming his plan to gather the Deathly Hallows and use them to usher in a new age of Wizard domination over Muggles. Dumbledore, blinded by love, went along with the plan for a time, but the two finally had a falling out when three-way duel between Grindelwald, Dumbledore, and his brother Aberforth led to the accidental death of their younger sister, Ariana. Grindelwald left Godric's Hollow, and began to amass followers. After a rash of Muggle attacks landed him on the wrong side of the Mininstry of Magic, Grindelwald took off for America, where he attempted to gain power over Credence Barebone (Ezra Miller), an Obscurial. After his true identity was revealed by Newt Scamander (Eddie Redmayne), Grindelwald was taken into custody by MACUSA.

And that brings us up to date with Fantastic Beasts: The Crimes of Grindelwald, in which Depp will reprise his role, escape from MACUSA, and continue gathering Dark Wizards to assist in his nefarious cause. He'll also be reunited will his friend-turned-nemesis Dumbledore, now played by Jude Law, as well as the central cast of the first film. Pottermore has reported that some other familiar names will appear in the film, as well; fans will finally get a look at Nicolas Flamel (Brontis Jodorowsky), friend of Dumbledore and creator of the Philosopher's Stone (or Sorcerer's Stone to us No-Majs), and Leta Lestrange (Zoë Kravitz), a lost love of Scamander's who was seen only in a photo in the first film, is now engaged his brother. Awkward.

Details on the new characters are scant, but intriguing: Claudia Kim will play an unnamed Maledictus, a person who "suffers from a blood curse that turns them into a beast," according to Pottermore. She'll be serving as a featured attraction in a wizarding circus, though it's unclear if she's a willing participant. Callum Turner will play Head Auror and elder Scamander, Theseus.

The film will take place in 1927, so don't expect to see that famous duel between Dumbledore and Grindelwald anytime soon (that happened in 1945) but now that Grindelwald's no longer masquerading as another wizard, he'll be free to carry what might be the most important plot device of the entire series, the Elder Wand. There are a total of five Fantastic Beasts films planned, so it looks like Dumbledore will win it from him around the time your kids are in high school. If only Time-Turners were real!