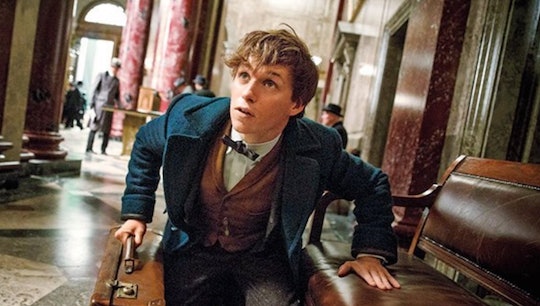 Attention muggles: dust off your toy wands, and once again join the ranks of wizards and witches alike in David Yates’ Fantastic Beasts and Where to Find Them new teaser trailer. In the film, fans are transported back in time to pre-Potter 1926 New York. The magical movie introduces audiences to an aloof “magizoologist” named Newt Scamander (Eddie Redmayne). Scamander is an English hoarder, who researches and collects fantastic creatures from around the world, then stuffs them into his enchanted briefcase, which he is able to sneak past the Big Apple's security — he must have learned his smuggling skills from supposed muggle Mary Poppins, who is famous for her own bottomless bag.

Fashionable carry-ons aside, Scamander plays into the Potter universe in that he later compounds his findings into the Care of Magical Creatures classes at Hogwarts that the world-famous trio, Harry, Ron and Hermione, eventually study. Unfortunately for him, the unregistered wizard accidentally has all of his cats let out of the bag, so to speak. During a visit to the Magical Congress of the U.S., someone performs an Alohomora spell and his brown leather suitcase unhinges, freeing all of his exotic beasts, and allowing them to wreak havoc on an unsuspecting Manhattan.

In sum, this film is like a giant science experiment containing a magical smuggler and muggles as variables. And observing what happens when you put the two groups in the same city together, which unsurprisingly, isn’t very pretty, cue Mary Lou (Samantha Morton) and Percival Graves (Colin Farrell).

Mary Lou is the closed-minded president of the wizard-eradicating New Salem Philanthropic Society, sounds friendly. If she were alive and kicking in the real world today, there would be no question that she'd be one of those avid Harry Potter haters attempting to ban the books from school libraries everywhere. She must be a part of the Dursley bloodline.

Her counterpart, Percival Graves, is a high-ranking Auror and the Director of Magical Security for MACUSA who looks out for the safety of the wizards. It's expected that he and Mary Lou will bump heads, just as much as the non-maj public and wizarding community throughout the film.

Overall, the film “looks part Potterverse, part Gotham, part The Crucible,” as Wired puts it, and appears to be a better fit for the older generation of Potter fans, as signaled by the closing theme, which is a slower, more mature sounding version of the signature Harry Potter song. Watch to see if this film can live up to the otherworldly expectations set by its predecessors, and how in the hell they manage to trap a giant monster bird into a teapot.