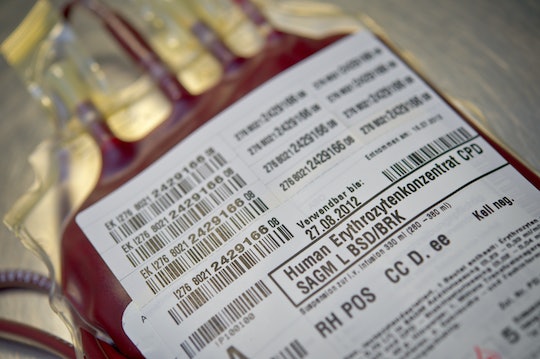 The FDA Has Lifted A Ban Keeping Gay Men From Donating Blood, But The New Guideline Isn't Less Discriminatory

After years of criticism, the FDA announced Monday that they have finally agreed to lift the ban preventing gay men from donating blood. The revised policy is considered by many to be a long time coming, as the ban was put in place during the early ‘80s, when fears about HIV were extremely high, and little was known about the virus, including how to quickly test for it. But we’ve come a long way in the 32 years since the ban was first introduced, and both medical experts and gay-rights activists have been advocating for an updated screening policy that is both more inclusive and also actually rooted in current scientific evidence.

As Vox reported, medical science now has the ability to diagnose HIV within weeks, and doctors also know so much more about prevention, transmission, and effective assessment measures that help to identify high-risk behavior on an individual basis, leaving no real solid scientific reason for why all men who have ever had sex with other men should be kept from giving blood simply because of their sexual orientation. In this sense, the FDA’s decision is a big step forward, but there is still a pretty big caveat: the new policy requires gay men to remain abstinent for 12 months prior to donation, according to the Associated Press.

But like many critics of the new policy, David Stacy of the Human Rights Campaign — the largest gay rights group in the U.S. — told ABC News that the FDA is continuing to be discriminatory by implementing the one-year deferral, according to ABC News:

It continues to stigmatize gay and bisexual men. It simply cannot be justified in light of current scientific research and updated blood screening technology.

Ryan James Yezak, founder and director of the National Gay Blood Drive, a U.S.-based advocacy group, voiced similar concerns in a statement on Twitter, “strongly [encouraging] the FDA to move toward a deferral based on individual risk assessment.”

The policy revision has also received criticism from members of Congress, who voiced their concern in a letter to the FDA back in July (when the policy was still in draft form). In the letter, members of Congress argued that the new policy would still effectively continue to unofficially ban gay men, as well as transgender individuals, according to Buzzfeed:

The draft’s proposed policy change would, in practice, leave the lifetime ban in place for the vast majority of [men who have sex with men], even those who are healthy. This serves to perpetuate the stereotype that all [men who have sex with men] pose a risk to the health of others. Both deferral policies as discriminatory and not based on science, and both approaches are unacceptable.

But the U.S. is not alone in its switch to a 12-month deferral policy. According to Vox, the U.K., Australia, Sweden and Japan already have year-long waiting periods for blood donations, although Italy, and most-recently Argentina, have both adopted an individual risk-assessment-based model on accepting blood products from gay men, according to TIME.

There’s no question that maintaining the safety of the nation’s blood supply is of the utmost importance, but it's clear that a blanket ban on entire groups of people is not the way to do it. The one-year deferral period, while it is something, doesn’t seem to be the answer either, though — it would mean that monogamous, low-risk gay and bisexual men who otherwise would be able to donate blood are still not able to. And it still continues to support the outdated and ignorant belief of the '80s that gay people are too irresponsible and high-risk by nature to avoid putting others at risk with infected blood (making no mention, of course, of the fact that straight people can easily be as equally-high risk, and yet they are still allowed the courtesy of being assessed individually).

The FDA’s updated policy is a step in the right direction, but, seriously, 2016 is right around the corner — it's time to ease up on old notions that science has already proven aren’t even true.