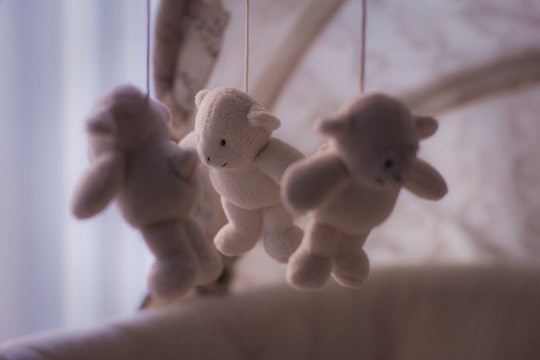 Being a parent today is pretty overwhelming. Technology and science has certainly made many aspects of parenthood much simpler, but all of the information out there can make things a bit confusing — especially when it comes to which products are safest for their little one. And one product is currently causing concern among the parenting community now that the U.S. Food and Drug Administration is warning against using baby sleep positioners.

The FDA, according to a new safety alert issued on Tuesday, "is reminding parents and caregivers not to put babies in sleep positioners" because these can cause suffocation that "can lead to death." The agency also noted that sleep positioners are sometimes called “nests” or “anti-roll” products for infants.

Before the FDA's alert, baby sleep positioners appeared to be a credible solution for babies who are finicky sleepers. Especially considering that prices for these products start at just $8, it's hard to pass up. But with this new information, what should parents do to prevent this, and are there any specific brands of sleep positioners that are still safe to use?

Well, the answer is actually pretty easy. The FDA warns that parents should not be using any kind of sleep positioner for their baby. In fact, the warning goes even deeper. Because of the high rates of Sudden Infant Death Syndrome (SIDS), the FDA also tells parents that they should "never put pillows, blankets, loose sheets, comforters, or quilts under a baby or in a crib," adding "these products also can be dangerous."

And unfortunately, the United States does have a high rate of SIDS. In 2015 alone, there were over 1,600 SIDS-related deaths in America, according to the Centers for Disease Control and Prevention. And 25 percent of those deaths were caused by accidental suffocation and strangulation in bed, as the CDC reports. And as several reports have indicated that sleep positions often result in babies face-down, it makes sense that the FDA would warn against them.

And while the SIDS rate has certainly gone down in recent years, it's still important to work to continue to lower it. In fact, the National Institute of Health has launched a "Safe to Sleep" campaign in order to inform parents about the importance of safe sleep for babies. According to the campaign, a safe sleep environment is vital in preventing SIDS and consists of the following:

So, while it may seem like a good idea to get your baby a sleep positioner to help them (and you) get some rest, it's actually quite dangerous. Really, babies don't need a lot in their cribs with them, and the more that's in there, the more likely it seems to be that they could suffocate.

But, sadly, it still happens. And that's why it's so incredibly important for parents to take heed of this latest warning. According to Fox News, "In 2010, the FDA and CPSC cited 12 babies who died when they suffocated using a sleep positioner." And that's 12 babies too many.

While sleep positioners might seem like a good innovation at first, they're clearly dangerous for babies, and should never be used. And, in general, the FDA wants parents to remember the important following sleep preparations:

Place a baby on his or her back at night and during nap time. An easy way to remember this is to follow the ABCs of safe sleep: “Alone on the Back in a bare Crib.”

Now that this new information has been made available to parents, more can implement these safe sleep practices at home to ensure their little one is secure in bed.