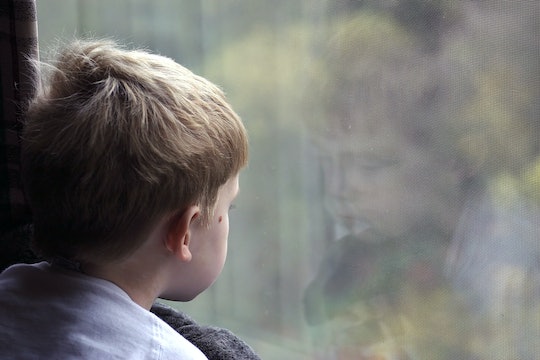 The FDA Still Allows Shock "Therapy" For Disabled Kids, These People Want To Change That

In 2018 it is still legal to subject children and adults with disabilities to electric shock. It’s a horrific human rights abuse, and for the past 12 days, members of ADAPT, a national grassroots group of disability rights activists, have been trying to change that.

Through rain, snow, sleet, and whipping winds, nearly 50 people with disabilities, most of whom were wheelchair users, protested in Washington, D.C. this week and last outside the home of Dr. Scott Gottlieb, Commissioner of the Food and Drug Administration, demanding that he finally release regulations that would ban the use of graduated electronic decelerator (GED) devices. Disability rights advocates, including ADAPT, have long opposed the use of aversive “therapy,” including GEDs, calling it “barbaric beyond belief.”

Colleen Flanagan, a disability rights advocate from Boston, Massachusetts, and member of ADAPT, was among those who braved the inclement weather to demand the release of the regulations. “It snowed three times. Winds were fierce; the weather made it so hard. But we persisted,” she tells Romper via email.

The Judge Rotenberg Center (JRC) in Canton, Massachusetts, is the only known facility in the country that uses GEDs on children and adults with disabilities. Not only does the school use these devices – they also manufacture them. Per the Associated Press, students who are treated with GEDs wear backpacks with wires attached to various parts of their bodies. Staff have remote controls that shock students when pushed.

Officials from the JRC insist that the electric shock emitted from the GEDs is no more painful than a bee sting, but those who have experienced it say otherwise. “It is a horrible pain that causes your muscles to contract very hard, leaving you sore afterward. I would often have a limp for one or two days after receiving a GED,” one former student wrote on the Autistic Hoya website in 2013. (JRC did not immediately to Romper’s request for comment.)

Proponents also argue that the use of aversive therapy, such as GEDs, is necessary to prevent people from harming themselves and others. However, some former students and staff disagree, telling Mother Jones that students are often shocked unnecessarily.

In 2012, disturbing video footage came to light of a 2002 incident involving Andre McCollins, an 18-year-old autistic black man, who was shocked for refusing to take off his jacket. McCollins was strapped to a board face-down and shocked an additional 30 times over the course of seven hours for tensing his muscles and screaming, CBS News confirmed. McCollins sustained burns on his arms and legs.

It is instances like what happened to McCollins that have caused outrage among disability activists. “No one should be comfortable with how disabled children are being treated at the Judge Rotenberg Center,” Flannagan tells Romper.

“The use of GED shock treatment has been proven therapeutically ineffective. Every day at the JRC autistic children are being shocked; it's torture disguised as treatment and absolutely wrong! Torture is never treatment,” she says.

Experts agree. “People don’t use it anymore because they don’t need to. It is not the standard of care. There are alternative procedures that do not involve aversives like electronic shock,” Dr. William Pelham, a behavioral specialist and director of the Center for Children and Families at the State University of New York at Buffalo, told the New York Times. “And I am not talking about drugs as an alternative. I am talking about other behavioral treatments,” he continued.

The use of aversives, like GEDs, is not only a disability rights issue — it is a civil rights issue that disproportionately affects disabled students of color. In fact, nearly 90 percent of students at the JRC are people of color, The Establishment reported. This is particularly noteworthy because disabled students of color are already more likely to be disciplined than their white peers, according to The Atlantic. The Obama administration proposed regulations to address the significant disparities facing students of color in special education, but Department of Education Secretary Betsy DeVos wants to delay implementation of these important rules.

Disability advocates are not alone in denouncing the JRC. Indeed, the school’s use of GEDs has been repeatedly condemned by federal and state authorities, with several investigations revealing significant abuse. In 2011, the FDA issued a warning to the JRC because the school had modified the devices beyond what was sanctioned by the agency. In 2014, the FDA began the process to ban the use of GEDs and in 2016, proposed regulations that would put an end to this type of aversive therapy. However, the agency has yet to promulgate its final rules.

The JRC’s use of GEDs has even gained international criticism by the United Nations' Special Rapporteur on Torture, Juan E. Méndez, who stated, "It raises a very serious concern. The passage of electricity through anybody's body is clearly associated with pain and suffering. Now it depends on the level and time and whether there's any rationale for it."

ADAPT’s recent protest was not the first time the group has engaged in nonviolent direct action to protect disability rights. Last year, members of ADAPT received national attention for their steadfast opposition to Congress’ repeated efforts to repeal the Affordable Care Act. Indeed, ADAPT has an impressive history of fighting for the rights of people with disabilities to live in their communities for more than 30 years. Activists believe the use of electric shock devices at the JRC is a direct infringement on the rights of disabled people:

“While ADAPT has long opposed all institutions they hold a special contempt for the Rotenberg Center because of their use of electro shock devices…[R]ather than torture used at the JRC, more supports are needed to assist people living in the community,” ADAPT said in a press release.

On Tuesday, day 12 of their protest, police informed the activists that they had 24 hours to vacate the public park they had been holding vigil at or they would be arrested, according to a tweet from ADAPT. In response, the activists took the protest to the FDA’s headquarters in Silver Spring, Maryland. First, in the lobby of the headquarters and then outside the building, members of ADAPT demanded a meeting with Gottlieb. Eleven of the members of ADAPT were arrested overnight after blocking an intersection.

Rather than meet with the activists, or explain the FDA’s delay in releasing the regulations, Gottlieb entirely disregarded them. It seems he would rather have them arrested than sit down and listen to their concerns. A spokesperson for the FDA told The Mighty that the FDA is working on finalizing a ban on electric shock use, though it can't say when that ban will be enacted. FDA spokeswoman Stephanie Caccomo didn't immediately respond to Romper's request for comment.

However, Gottlieb, and the Trump administration writ large, should take notice: Disability rights activists do not back down. “I think the heart of the story is about our persistence and endurance,” Flanagan tells Romper.

More Like This
Gov. Abbott & Other Republicans Condemned President Biden For Feeding Immigrant Babies
These Tweets Chiming In About The Baby Formula Shortage Have It Oh So Wrong
Spain Could Offer Up To 5 Days Of Menstrual Leave A Month & It'd Be A Game Changer
Meghan Markle Made A Mic Drop Statement About What Working Moms Really Need