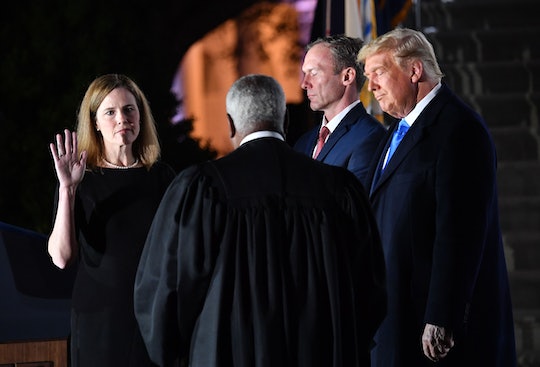 Amy Coney Barrett was sworn in as the 115th Supreme Court justice at the White House on Monday night and is expected to take her judicial oath privately at the Supreme Court on Oct. 27, one week before Election Day. Barrett's first week on the Supreme Court is likely to be a busy one with cases related to the president's taxes and abortion on the docket. Indeed, the first abortion case Barrett could hear as a Supreme Court justice stands to have major ramifications on reproductive rights as it directly challenges Roe v. Wade.

This Friday, the Supreme Court is expected to consider whether or not it will hear the case of Dobbs v. Jackson Women’s Health Organization. While the case centers around a 15-week abortion ban Mississippi Gov. Phil Bryant signed into law in 2018, it is widely considered to be a direct challenge to the precedent outlined in the Supreme Court's landmark 1973 ruling in Roe v. Wade.

Mississippi's abortion law bans nearly all abortions after 15 weeks, allowing only for exceptions related to severe fetal abnormality and medical emergencies. There are no exceptions made for rape or incest. According to CNN, the law was struck down by a federal Mississippi judge in 2018, and then again by the 5th U.S. Circuit Court of Appeals in 2019.

If the Supreme Court decides to take up the case, SCOTUS blog has reported they'll be tasked with ruling on three separate issues:

But as CBS News has previously reported, the timing of Dobbs v. Jackson appearing before the Supreme Court just as Barrett is confirmed may not be entirely coincidental. According to the news outlet, Mississippi Attorney General Lynn Fitch petitioned the court to review the ban for a second time last week, hours after the Senate Judiciary Committee voted to advance Barrett's nomination.

NARAL Pro-Choice America Chief Communications and Research Officer Adrienne Kimmell criticized the move earlier this month in a statement accusing Fitch and other anti-choice politicians of rushing to cut down reproductive freedoms.

"This new filing by Mississippi's Attorney General makes clear the threat to Roe v. Wade is real and imminent," Kimmell said. "Make no mistake: Republicans have been trying to dodge their desire to end Roe, but the cards are on the table. Anti-choice politicians are already hanging the drapes and putting any step in motion they can to strip reproductive freedom from all Americans."

While Barrett repeatedly declined to answer questions regarding Roe v. Wade in her confirmation hearings, her personal opposition to abortion is no secret. In 2013, Notre Dame Magazine quoted Barrett as saying she believes "life begins at conception." In 2006, Barrett signed an anti-choice newspaper advertisement that ran, on behalf of St. Joseph County Right to Life, in The South Bend Tribune. According to the National Review, the ad noted those who'd signed "oppose abortion on demand and support the right to life from fertilization to natural death."