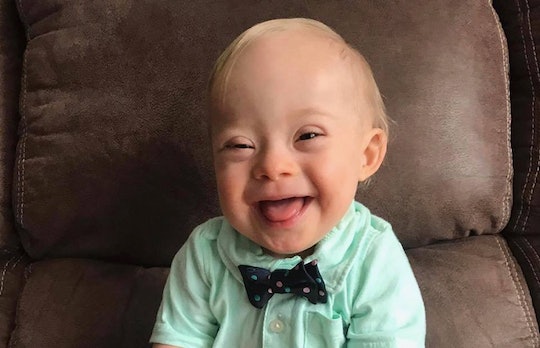 Meet the newest member of the Gerber family! A baby with Down syndrome just became the Gerber Spokesbaby for the first time this year, and the internet couldn't be more thrilled about the news. The honor went to 1-year-old Lucas Warren, from Dalton, Georgia, who beat out 140,000 other cute babies in the 2018 Gerber Spokesbaby competition.

"Lucas’ winning smile and joyful expression won our hearts this year," Bill Partyka, CEO of Gerber, said in a statement "Every year, we choose the baby who best exemplifies Gerber’s longstanding heritage of recognizing that every baby is a Gerber baby, and this year, Lucas is the perfect fit."

The Warren family will take home $50,000 for the win, which they plan to put towards Lucas' education. But for Lucas' parents, Cortney and Jason, it means so much more than that.

"We're hoping this will impact everyone — that it will shed a little bit of light on the special needs community and help more individuals with special needs be accepted and not limited," Jason told TODAY Parents. "They have the potential to change the world, just like everybody else."

The winning photo of Lucas, which Cortney said she submitted "on a whim," according to The Independent, features Lucas wearing a bow tie and a huge grin.

Around one in 800 children are born with Down syndrome, a genetic disease that affects newborns' intellectual ability and muscle tone, with about 5,300 babies born with the condition in the United States every year. There are over 400,000 Americans with Down syndrome, and an estimated 38 percent of Americans know someone with the condition, according to the Global Down Syndrome Foundation.

And yet, representation of those with Down syndrome often remains woefully lacking in popular media: unless the condition itself is a focal point or an issue for others to come to terms with, people with disabilities are often erased from the conversation entirely. This kind of depiction ignores those with disabilities and often crafts inaccurate stories about their lives.

Katie Driscoll, founder and president of the non-profit Changing the Face of Beauty, applauded Gerber's choice to TODAY Parents. "We believe if brands represent children with a disability, they are communicating their value to our society," Driscoll said. "Moves like this move us closer to a more inclusive world."

The response from the public has been just as positive, with support coming in from other parents of children with disabilities and a lot of love being shared by Lucas' new fans.

Other parents' pride was understandable, and Cortney said she was proud to see Lucas have such a platform to spread joy. "We hope this opportunity sheds light on the special needs community and educates people," she said in a statement.

As the new Gerber Spokesbaby, Lucas will be featured in Gerber's social media throughout the year. Ann Turner Cook, the 91-year-old who was the original Gerber baby featured in the company's black and white drawing, told BuzzFeed News in a statement that she was overjoyed with this year's contest winner, as well, saying:

There is no greater privilege than to be a universal symbol for babies all over the world. I am delighted to take part in this celebration. Lucas is precious, and I look forward to watching him grow this year!

Lucas wasn't the only winner this year, either: 12 other babies received awards and prizes in Gerber's "Giggles and Wiggles" and "Best Dressed" categories (although I'm assuming the best-dressed babies all came second to Lucas in his bow tie, of course). Here's to watching Lucas smile his way through 2018 as this year's Gerber baby, and to continuing to see more inclusive representation in popular media.

More Like This
Parents Have Thoughts After Court Orders Nursing Mom To Use Bottle In Custody Dispute
6-Year-Old Boy Has Zero Regrets After Ordering $1,000 Worth Of Food On Grubhub
Florida Teachers With “Unvetted” Classroom Books Could Face Felony Charges
Chrissy Teigen Shares First Photo Of Esti & Now We All Have Baby Fever
What Parents Are Talking About — Delivered Straight To Your Inbox