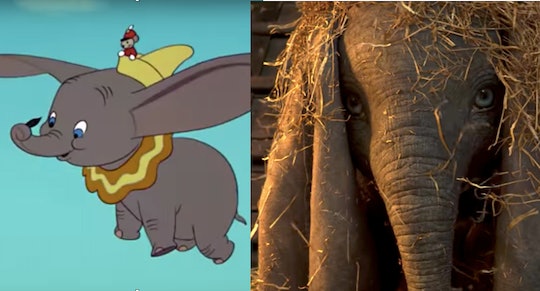 Disney's New 'Dumbo' Trailer Is Here, & It Will Definitely Make You Cry

Even though reboots and live-action remakes have become a big deal in recent years, it always feels a bit nerve-wracking when a beloved film from your childhood gets an update. But on Wednesday, Disney released a trailer for its Dumbo remake, and from the sounds of it, fans of the original animated elephant are seriously impressed. The 1941 feature is now getting the full Tim Burton treatment, according to Entertainment Weekly, and judging by the social media reaction, the only actual downside of it all is that it won't actually hit theaters until March 2019. And while the film definitely looks like it'll pack an emotional punch (I mean, I'm pretty sure I'm still traumatized by watching Dumbo as a young kid, honestly) Disney's timeless tale of a big-eared, flying elephant is something fans seem to be totally here for.

The nearly one-and-a-half minute clip starts out with the live-action baby elephant emerging from underneath a pile of straw, to be met by former circus horse showman and newly widowed father Holt Farrier (played by Colin Farrell), and his two children, Milly and Joe. With a little love and encouragement from his new "family," Dumbo, now a circus elephant, stuns the crowd with his surprising ability to fly, in a whimsical reimagining of the hopeful story of an outcast turned star.

Of course, Dumbo isn't all happiness and rainbows — even the original had its brutal moments, like the way Dumbo is teased about his ears, and the heartbreaking separation of Dumbo and his mom (which I'm sure I have still not emotionally recovered from):

But, our collective millennial psychological trauma aside, the trailer has already become a big hit on Twitter, where the consensus seems to be that Burton's Dumbo update is going to be straight-up incredible:

Some were also seriously impressed with the trailer's release, given that it was basically the happiest Twitter surprise they could wake up to on a random Wednesday morning:

From the looks of it, Burton has also definitely managed to deliver when it comes to some of the film's most memorable moments, like the "pink elephant" scene, when Dumbo accidentally gets, uh, kind of wasted:

As fantastic as the film appears to be though, it's probably also not a bad idea to, uh, prepare yourself:

Of course, the switch from animation to live-action cinematography also means there will inevitably be some changes: for one, Dumbo's animated BFF Timothy Q. Mouse seems to have been replaced in the updated film with Milly and Joe. But, most significantly, it sounds like Burton's Dumbo will also advance the storyline — primarily because Dumbo actually learns he can fly much earlier in Burton's film. As actor Danny DeVito, who plays circus owner Max Medici in the film, explained, according to Geek Tyrant, "The original ends with the elephant flying. This one begins with that and goes even further."

Dumbo is just one of a number of impressive-looking Disney remakes: The Jungle Book, Beauty and the Beast, and Alice in Wonderland have all received the live-action update treatment, according to The Independent, while Aladdin, The Lion King, and The Little Mermaid are still to come. But judging from the reaction to the first teaser trailer, fans are already totally on board, and will be eagerly awaiting its release.

As much of a challenge as it must be to attempt to update a film that is a beloved childhood classic for so many people, with Burton at the helm, Disney definitely seemed game to take it on. And honestly, as much as I'm not sure my own heart can handle it, the consensus seems to be that it was a really great decision.