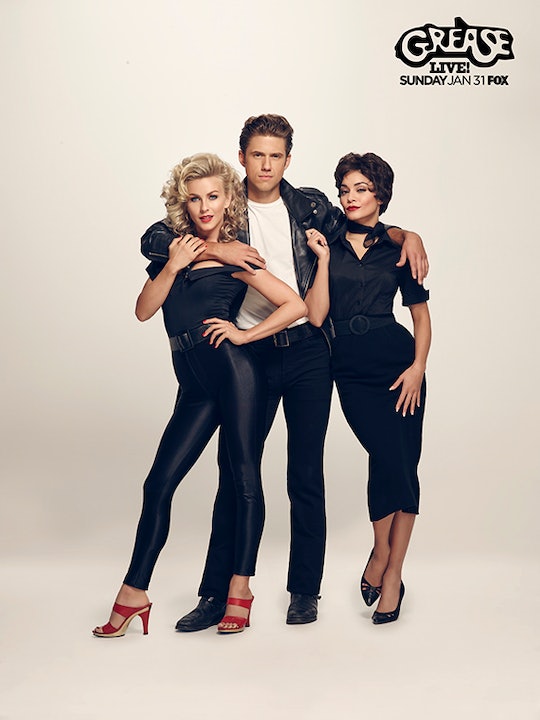 The First 'Grease: Live' Promo Is Out, & Here Are 4 Scenes The Live Show Better Include

Earlier this week, Fox released first-look photos for Grease: Live (their latest musical production). These images spread quickly, and the teasers were enough to make fans go wild. Then on Tuesday the first promotional video for Grease: Live was released and it looks like I better brush up on my hand-jive game because their moves are solid. The stellar cast includes Julianne Hough playing Sandy, Aaron Tveit as Danny, Vanessa Hudgens as Rizzo, and Carly Rae Jepsen as Frenchy — and you guys, it's gonna be good. It's gonna be so good.

This is the second year (and third time) live musical theatre will may its way right to our TVs and into our homes. It started with NBC’s The Sound of Music, starring Carrie Underwood, in early 2014, and was followed by Peter Pan, starring Allison Williams and Christopher “More Cowbell” Walken (also on NBC). While each of these productions was met with mixed reviews, I must say I loved the kitsch and family-friendliness of it all, and I loved the way Walken was — well — Walken. But this will be Fox’s first foray into the spectacle known as live theatre.

And while I'm thrilled it's Grease, there are a few things both the production and performers better do right:

This may be obvious and redundant (since the trailer already gives us a glimpse at this), but Grease didn't make the hand jive; the hand jive made Grease. Period. Even though they tease it in the trailer, here's hoping the full scene makes it way on to the small screen. You better be damn sure that if this is missing or "wrong," you're going to have a full-on internet rebellion. Led by me.

The "Shape Up" Sing-A-Long

This infamous Grease scene is one of the best scenes in the entire movie. The dancing is great, the song is freakin’ catchy (just try to tell me you don’t know the words), and the chemistry is potent. IMO, this scene has the power to define the entire Grease: Live production so, uh, no pressure guys ... just make sure you get it right, OK?

(And the same goes for "Summer Nights!")

All The Badassery Of The Original

While I have no doubt the sexual tension will be played up — this is the 21 century! — I really hope booze and cigarettes aren’t erased from the script or, worse, replaced with some sort of vaping device.

Let’s not be too PC, alright?

From Frenchy’s pink 'do to Danny (and the rest of the gang's) infamous hair slick, this needs to be on point. Practice flickin’ those wrists now, fellas!