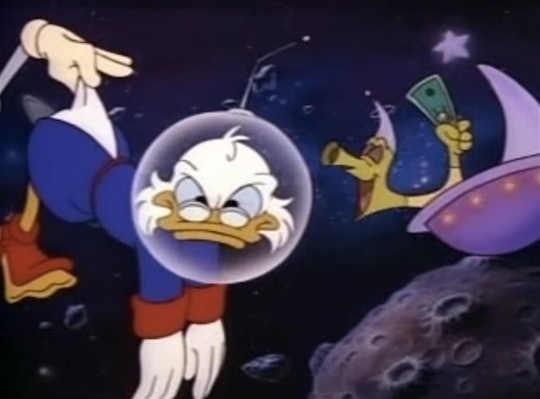 One of the coolest parts of being a mom is getting to share your favorite shows with your own kids. With '80s and '90s nostalgia at an all-time high, there are plenty of channels bringing your favorites back. On Monday, the first image from the DuckTales revival was finally released, and the nostalgia is almost too much to handle. If you haven't watched the show since the early '90s, it's time to catch up before the series premiere in 2017 on Disney XD.

According to IMDB, the original DuckTales premiered in 1987, to great acclaim (among pre-schoolers everywhere, naturally. Adults? Not so much), eventually becoming a kid favorite. The show focused on Donald Duck's nephews and their Uncle Scrooge as they went on wild adventures facing formidable foes. After several successful seasons (and one adorable movie, Ducktales: Treasure of the Lost Lamp), the show finally left the airwaves in 1992.

However, last February, it was announced that the folks at Disney would be revisiting the show and creating a reboot. The beloved characters will make their return to the screen in 2017 along with pilot Launchpad McQuack, Scrooge rival Flintheart Glomgold, and the villainous Beagle Boys, according to Entertainment Weekly. Donald Duck is even expected to make a cameo or two (in the original series, he was mostly out of the picture when he joined the Navy). DuckTales' animation style will be reminiscent of the original, according to Oh My Disney. It'll definitely be an updated version, but it looks as though fans can expect to see the ducks close to the way they know and love them.

Of course, your kids may be seeing DuckTales for the first time — so here are five ways to get them just as pumped up as you are for the series' debut next year:

DuckTales was a comic book series before it was a cartoon, according to IMDB. You can read the originals by Carl Barks in the DuckTales graphic novels.

Watch Raiders Of The Lost Ark

Is it DuckTales? No. Was it influenced by DuckTales? Maybe. Sources at the fan website D23 have claimed that George Lucas and Steven Spielberg credited the cartoon with partially inspiring Indiana Jones' adventures in Raiders of the Lost Ark, (according to Mental Floss). Of course, they were referring to the comics, not the show, since it came out after Raiders. But how cool if that's true — right? (Make sure your kids are old enough to handle the content in Raiders, of course.)

Check Out "Kids React To DuckTales"

If your own kids need help telling the nephews apart, TheFW reported that Huey wears red, Dewey is in blue, and Louie's wearing green. And the video is just adorable for adults to watch anyway, if you're still not convinced.

DuckTales was a favorite of NES fans. Even if you don't have your old gaming systems, you can still play: according to Mental Floss, the whole DuckTales video game is available online.

The world is full of beautiful things. This is one of them.

Of course, you could always go back and watch the original series while you wait for the new one. You don't have to dig out your VHS player: DuckTales DVDs are available online.