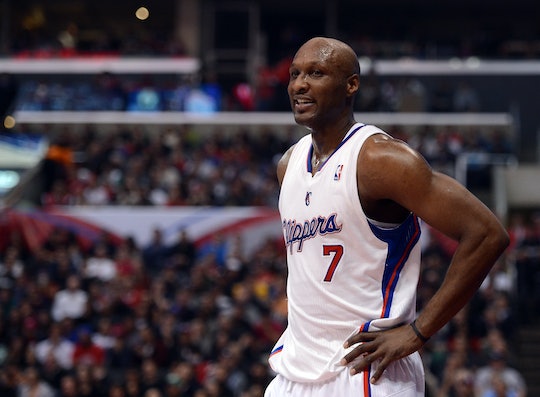 Lamar Odom spent the holidays with his children, Lamar Jr. and Destiny, according to US Weekly — and they have the family selfie to prove it. The Instagram pic, which Lamar Jr. posted to his account on Thursday, is the first photo of Lamar Odom since his hospitalization back in October, after he was found unconscious after overdosing at a Nevada brothel, according to the Los Angeles Times. His ex-wife, Liza Morales, flew to Nevada with their children following the incident, and from the looks of the latest photo, they are continuing to be a big part of Lamar’s recovery. Lamar Jr. captioned the Instagram photo “Christmas with my pops,” and added, “here’s to 2016. Blessed.”

Odom has made some major strides since his initial hospitalization. Us Weekly reported back in October that he had “suffered a series of strokes [in hospital] and was placed on a respirator to breathe and dialysis for his kidneys”. But according to TMZ, the NBA star managed to took his first steps without a walker last month, and sources say that his cognitive function is also improving. In November, Odom’s estranged wife Khloe Kardashian spoke about the ups and downs of his recovery to the Today show, saying,

"Every day is different. The good thing is he's off of medical machines that will keep him alive. He's learning how to walk again, and [continuing] cognitive therapy and speech therapy. They think, like, within a year and a half to two years, he might, you know — mentally — be fully recovered, but they don't know."

Even though Odom has had to overcome major hurdles in the months since his overdose, he’s seemingly had no shortage of love and support. Following his hospitalization, Kardashian called off their divorce, so that she could continue to make medical decisions on his behalf, and was a near-permanent fixture at his bedside, according to E! News. Morales has also rallied around her ex-husband, and posted a letter of gratitude to Twitter on Thanksgiving for everyone who sent “prayers and well wishes [to] Lamar and his family.”

While Odom is still receiving treatment at Cedars-Sinai Medical Center in Los Angeles, a source tells Us Weekly that he will eventually be transferred to a rehab facility to continue his recovery. And it sounds like he plenty of motivation to get there: the magazine reports that Odom speaks to his children every day, and that he “has fought to get better mostly for them.”