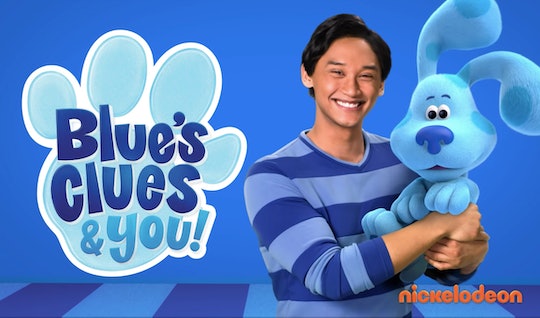 Millennial parents and their kiddos are in for a treat. That's because in just a few months, Blue, Tickety Tock, Slippery Soap, Mailbox, and more will be back on TV and, finally, the fist look at Nickelodeon's new series Blue's Clue & You! — a curriculum-driven interactive show for preschoolers airing on the network this fall — has arrived. And, yup, it looks so cute and fun.

In the first look of the new series, viewers get to see a peek at the new host of the Blue's Clues reboot, 24-year-old Joshua Dela Cruz — who's new to TV but has plenty of experience on Broadway, including a role on Disney’s Aladdin — singing with everyone's favorite puppy Blue, her best friend and next door neighbor Magenta, and a whole bunch of old and new characters.

"Hi, it's me Josh, and this is my puppy Blue. We can't wait to play Blue's Clues with you!" Dela Cruz says in the first look, which aired today, going on to sing...

"It's Blue's Clues and you, I think they're here somewhere, let's use the Thinking Chair, let's use the Handy Dandy Notebook, and help all of our friends."

Dela Cruz's character goes on to introduce viewers to fan-favorites from the original series, including Tickety Tock, Slippery Soap, Shovel, Pail, Mr. Salt and Mrs. Pepper, Cinnamon, Paprika, Sidetable Drawer, and Mailbox. And, of course, the OG Thinking Chair is there, too. Kids will also get acquainted with a brand-new Handy Dandy Notebook and Crayon, as well as Josh’s new addition, Handy Dandy Guitar.

Premiering in November 2019, Blue and Josh will take their viewers on a "clue-led adventure to solve a daily puzzle" on Blue’s Clues & You!, the network said in a press release. And the best part? The interactive series includes a whopping 20 episodes, so there will be plenty of puzzles for your kids to solve alongside the show's many adorable and fun characters.

"With each signature paw print, Blue identifies clues in her animated world that propel the story and inspires viewers to interact with the action," the network said.

As an educational tool, Blue's Clues has been effective in enhancing the "development of attention in children," thanks to its repetition, its lively nature, and its ability to keep kids focused on the content, according to research from the Association for Psychological Science.

But picking things up more than a decade later, Blue’s Clues & You! will, of course, look a bit different from the beloved 90s Nickelodeon hit, which was one of the first children's TV shows to use cutout animation. This new series, however, will use new CG-animation technology. But the interactivity fans know and love will be there, just in an updated format.

An exact air date in November hasn't been released just yet, but the fall will be here before you know it. And if your kiddos can't wait to help Blue uncover all sorts of clues, you can catch up on old episodes of the classic Blue’s Clues on NOGGIN.