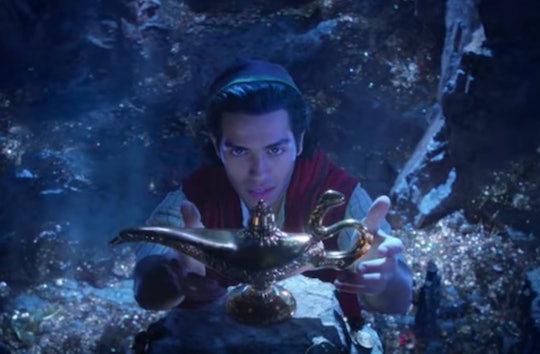 It seems as if every beloved classic Disney movie is getting a live-action remake. From Dumbo, to Lion King, to now Aladdin, these films are getting a serious (and much welcomed) makeover. And the first look at the live-action Aladdin remake will make people so excited for the film to come out next year.

Entertainment Weekly has the inside scoop into the new film, due out next year, and it doesn't disappoint. On Tuesday, new photos and details were released about the new film, which is slated to be released in theaters on May 24, 2019, and will be here before people know it.

Of course, everyone knows that Aladdin is about a "street rat" who, with the help of Genie, falls in love with a princess, Jasmine, and shows her a "whole new world." But, it wouldn't be a Disney movie without a villain, a talking animal sidekick, and huge song and dance number, and this new live-action remake will definitely include all of those things.

On Wednesday, Mena Massoud, who plays Aladdin, shared four brand new photos on Twitter from the movie, giving fans a first look at just how epic the film is going to be.

It doesn't hurt that the Genie in the film is being played by Will Smith, who tapped in to his roles in previous movies, TV shows, (like the beloved sitcom from the 1990's, Fresh Prince of Bel-Air), and his rapping career to bring his own take to Genie, according to Entertainment Weekly.

"I think it will stand out as unique, even in the Disney world," Smith told Entertainment Weekly. "There hasn't been a lot of that hip hop flavor in Disney history."

Another unique thing about this new Aladdin remake? The music. In this new take on the old classic, Jasmine gets her own solo song which is reportedly going to be "very empowering for women", according to Variety. And it's just one of the new numbers that the film's original composer, Alan Menken, has written with songwriters, Benji Pasek and Justin Paul (also known as the team who wrote the original songs for The Greatest Showman and La La Land). There will also be a few new characters in the film, too, which means that viewers won't be sitting through the same old film (even if it's one they've grown to know and love).

But that isn't to say that fans are going to accept this change with open arms. People are already taking to Twitter to share their distaste for this new look.

But people shouldn't judge the movie from these photos just yet. Will Smith shared on Instagram that Genie will be blue and be animated in the movie through CGI, just like the character was was in the animated classic, according to Consequence of Sound, which might come as a relief to a lot of people.

This technically isn't the first time that people have seen anything from the new remake of Aladdin. A teaser trailer for the film first debuted in October, giving audience members a look inside the city of Agrabah, and allowing them to see the character, Aladdin, for the first time. And in spite of the criticism now, the comments about the trailer are overwhelmingly positive.

But, these new photos that were just released definitely show a lot more than the teaser trailer did.

From the all star cast, to the incredible music, to the fact that Disney is putting its stamp of approval on it, there really is a lot to be excited for with this new remake. Thank goodness that the new year is almost here, because there only five months until people will be able to see this film on the big screen — and then they'll definitely be able to form an opinion about it.