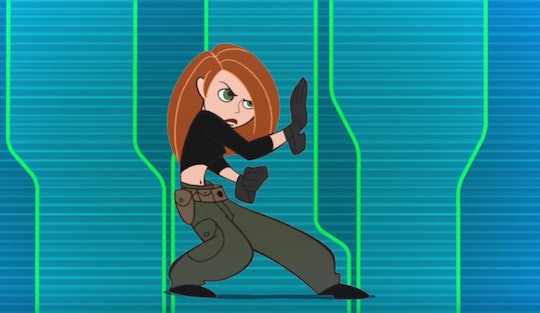 The First Look At The Live-Action 'Kim Possible' Movie Is Here, So Call & Beep Everyone

Anyone who watched the Disney Channel in the early 2000s likely caught an episode or two of Kim Possible, the animated show about an average high school cheerleader, except for the fact that she fights crime in her spare time. Now, more than 15 years since the show's premiere, Kim Possible is getting a reboot with a live-action movie. And thanks to this weekend's San Diego Comic Con, fans got to see the first look at the live-action Kim Possible movie.

It's been a long time since Kim Possible was on air, so it's OK if you need a refresher about the show, or your kids need to be brought up to speed. The show, which aired for four seasons beginning in 2002, focused on best friends, Kim Possible and Ron Stoppable, his naked molerat (and trusty sidekick), and Rufus as they attempted to fight crime and save the world, according to The Gamer, all while dealing with real life things, like homework and relationships. All of this was so enthralling back when the show originally aired, and of course, it still probably resonates with those same audience members (and new ones) to this day,

Which is why the live-action Kim Possible movie sounds like a great idea. In the first look at the new movie from SDCC, actress Sadie Stanley can be seen bringing the titular character to life for the first time ever, according to Deadline. And it will hit everyone right in those nostalgia feels.

But, it's impossible to look at the newest photo from the Kim Possible reboot without noting the differences between Stanley's take on Kim and the original, animated version of Kim.

Based on the photos, Kim's oversized cargo pants and crop top have been replaced with a more fitted look. Instead, the new version of Kim sports lace up green pants and a fitted t-shirt with a built in choker. The new version of Kim also sports more accessories than the old. Her cargo boots and fingerless gloves are a super sensible choice for fighting crime, along with her belt bag and knee bag.

And the good news is, Kim's perfect red hair is unchanged.

But, of course, fans of the original show had a little bit of a problem with Kim's updated look. And, shortly after Kim's new look was revealed, people took to Twitter to share their thoughts on it.

But, as other Twitter users were quick to point out, this take of Kim Possible is a modern, updated version. Just because this Kim looks a little different from the Kim Possible of their childhood doesn't mean the film won't live up to the show's reputation.

But before people really form an opinion about the new Kim Possible film, they'll have to wait a little bit longer to do so. The details about the new film are scant, according to Hypable, and a release date for the film is unknown, other than the fact that it is coming out in 2019. No details from the plot of the movie have been released either, other than the fact that the film will be based on the series, according to Disney, whatever that might mean.

After being cast in the film, Stanley took to Instagram where she talked about how excited she is to play the starring role. "I will be playing the iconic, strong, empowering character of Kim Possible in Disney's live action original movie!" Stanley wrote. "I just wanted to say I know the responsibility I'm taking on."

With that said, fans will just have to trust Disney to do its favorite cartoon some justice.