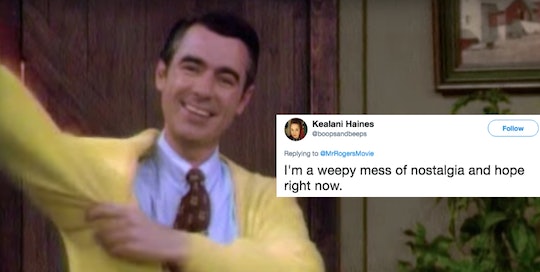 The First Trailer For The Mr. Rogers Documentary Is Here & People Are In Tears

These are pretty cynical and sometimes scary times, which is probably why people on social media are so excited about the first trailer for the Mr. Rogers documentary that was released on Tuesday, which would have been Rogers' 90th birthday. The trailer is for Won't You By My Neighbor, a feature length doc that comes out on June 8 of this year and chronicles the creation and success Mister Rogers' Neighborhood.

The film, which debuted the Sundance Film Festival this year, is directed by Morgan Neville features old footage of the show and archival interviews with Fred Rogers, who died in 2003, at the age of 74. While most of us might remember the puppets and the cardigans as being the hallmarks of the program, the documentary will take a close look at what really made the show a success. It wasn't because there was a lot of action, that's for sure. Instead, it was Rogers' ability to connect with kids and tackle tough topics, like death, divorce, depression, and even race.

Neville told ComingSoon.net, "The Fred Rogers I discovered making this film is at once comfortably familiar and completely surprising. I believe Mister Rogers is the kind of voice we need to hear right now."

Judging by people's reactions on social media, the rest of the world definitely agrees that we could all use a little Mister Rogers right now, too. The general consensus on social media was that basically everyone cried through the trailer, plans on sobbing in the theaters, and definitely adored Mr. Rogers.

Although, there was one person on Twitter who seemed to have absolutely no idea who he was. "I had no idea about this human but now I’m very much intrigued. I can’t wait to see this," one user named wrote. But other than that, people on the internet seem very ready for this walk down memory lane and a fresh look at the man who guided them through their mornings as kids.

The Reactions Were All Around Positive

In the trailer, producer Margy Whitmer says of Rogers, “He was saying something really important," which is hard to remember. As kids, we likely all didn't realize just how radical Rogers was — talking to children not as if they were silly little things, but the actual human beings that they are, with all of their complexities. "Children have very deep feelings, just the way everybody does,” Rogers says in the trailer.

Footage of Rogers trying to learn to dance with a kid, talking to a child in a wheelchair about feeling "blue" sometimes, and explaining what assassination means on a special episode in the wake of the death of John Lennon in 1981 highlights just how important the television show was for kids. Who else would talk to kids like that?

Morgan once again avoids making a traditional biodoc and instead takes us behind the curtain to see how Fred Rogers navigated the cultural and social issues of the second half of the twentieth century with his own brand of forward-thinking, compassionate wisdom far beyond his time. Mister Rogers makes us all want to be better people, and we couldn’t be more proud to be a part of telling his story today.

Rogers sums up just what's pulling at peoples' heartstrings in an interview in the trailer. We hear him say, "Love is at the root of everything. All learning. All relationships. Love, or the lack of it."

That hits a little too close to home these days, given the political climate and the onslaught of seemingly always terrible news. Yea, we could all use a little Mr. Rogers right now. See you in the theaters this summer, I'll be the one sobbing into her popcorn.