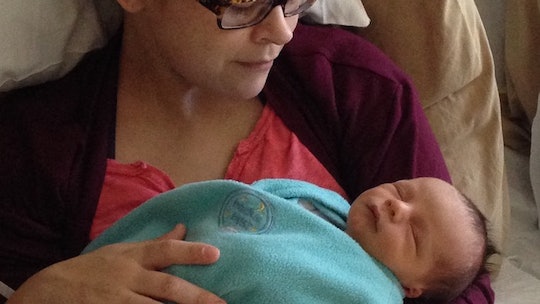 I met my obstetrician for the first time in my 38th week of pregnancy. A roll of the dice? Maybe. Changing doctors so late in the game wasn't my plan, obviously — I do not recommend traipsing from practice to practice looking for an OB who will allow you to transfer at 38 weeks! — but when things don't seem right, you have to trust your gut. Though I was already at term, I decided to get a couple of weeks in with a doctor who felt more in tune with me before hitting my due date. It was my first major decision as a mother, and one that proved fateful.

I will always remember the moment I walked into the hospital to meet my new OB. I caught a glimpse of myself in the tinted automatic doors as I walked in, my thrift store plaid coat draped over my giant belly. I’m cute pregnant, I thought. I’ve got real style. I had finally eased into myself as a pregnant person in the world. I have just two more weeks to see this sight, so I'll try to enjoy it, I told myself. I thought about how when I got home later that day I should probably start working on a hospital bag, so that when my waters broke, I could just grab that sucker and head to delivery. I thought about the snacks. I was really obsessed with having enough snacks on me for the delivery. I wanted sweet snacks and savory snacks and tons of candy. These were the big decisions I was focused on.

This was mid-week on a workday, and I had taken the afternoon off work to fit in this important appointment. I had only my purse with me. And my half-charged cell phone. I was 45 minutes from home.

The nurse saw me first. We did about an hour’s worth of getting her up to speed on my pregnancy before she asked about my last ultrasound. "It was at 20 weeks," I said, which was the last time I believed it should have been. "You haven’t done any others?" She seemed uncomfortable.

There was little to no movement. There was almost no amniotic fluid left for my baby to swim in. It was crucial to induce me.

So I shook myself out of of my coat and my clothes and into a paper gown. I laid back and waited for the technician to give me the royal tour.

She waved her wand. To the left and to the right, and up and down repeatedly. She was pressing and pressing. She was suuuuuper quiet. I thought the baby must be hiding. "Having a hard time"’ I asked. She murmured words I think she didn’t intend for me to understand. Said she just needed a few more minutes and a few more movements across my skin. Then she repeated that line.

By the time the doctor walked in, it was apparent that I was going to be receiving some information. There was little to no movement.

There was almost no amniotic fluid left for my baby to swim in.

It was crucial to induce me.

“Okay — so I should go home and come back in a couple days?”

“No. Now,” he told me. “You’re being induced immediately. Head down to floor four and check in,” he said matter-of-factly. His voice was an attempt at calm laced with urgency and left me utterly floored. But I did as I was told.

The odds are I will never see that doctor again, but I will always be grateful to him.

So I emailed him from my phone at his desk, hoping he would see the message in his work inbox, and that it wouldn’t go to spam. I was petrified.

He got the message. Soon after, he arrived. We called his mom and had her pick up our dog, and then began waiting for our baby to come out and meet us.

Our baby didn’t come that day. Nor the next. He came on the third day in the hospital, after I had been through some procedures I never want to go through again. A Foley balloon catheter, a nearly-botched epidural, and an emergency c-section delivery.

Had this doctor not made the decision to induce me, I would have lost my baby.

The next time I saw my new doctor was post-birth. He stopped by the room to check in on me. He hadn’t been on shift during my delivery. The truth is, I could be standing next to the surgeon who delivered my child at the grocery store, and I wouldn't even recognize her. I don't know how many doctors came in and out of my room during those three days. I don't remember their reasoning behind anything. I simply plugged along, accepting whatever advice they had for me, questioning little, scared of everything.

I’d had so little interaction with doctor that sent me off to be induced days earlier. An introduction. Now a post-delivery inquiry. I didn’t know him at all, and he didn’t know much about me. But I felt so indebted. I thanked him from the bottom of my heart.

Inductions can be a bumpy ride — they're not your first choice for a birth plan, but, had this doctor not made the decision to induce me, I would have lost my baby. Not only was there little fluid left around his little body, but the cord had also been wrapped around his neck. During the days leading up to the emergency c-section delivery, he had crashed twice, but they hadn’t known why he couldn’t breathe. Each time, they were able to stabilize him again. When they finally made the call for the c-section, it wasn't because he was crashing, it was because it was simply time to get him out. The process had gone on too long.

The odds are I will never see that doctor again, but I will always be grateful to him. He made sure my baby got into my arms safely.