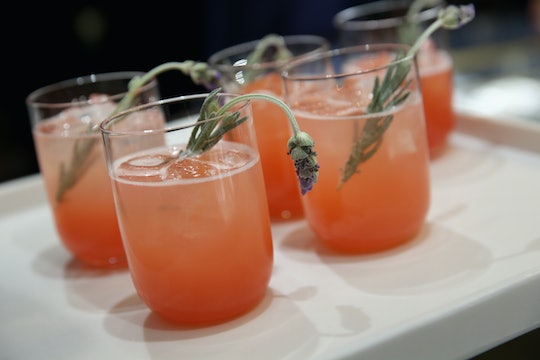 The Fisher Price Happy Hour Playset Isn't Real, So Parents Can Save Their Outrage

Calm down. Deep breaths. A fake ad featuring toddlers belly up at a toy bar has gone viral, causing parents across social media to clutch pearls and drop lattes in horror at the idea that a well-known toy company would encourage kids to drink alcohol. People, the Fisher-Price Happy Hour Playset isn't real, so parents can save their outrage for something more important. Like the fact that Hatchimals are sold out everywhere.

It all appears to have started with an Instagram post from artist, Adam Padilla, who shares tons of original, and hilarious, memes on his Instagram account @adam.the.creator. He shared the "Happy Hour Playset" meme on Dec. 6 with the hilariously misleading caption, "They got a happy hour playset for toddlers? I'm done," and it quickly went viral. From Instagram, it appears to have been shared on Reddit. Then, it hit the social media platform preferred by humorless moms and grandmas everywhere — Facebook. Now, I know people are tired, and the political and media climate demands vein-popping outrage at every sleight, but does anyone really think Fisher-Price would make and market a play bartender set for toddlers? Maybe stop and think a minute before you go ballistic on social media, and consider that someone's just having a laugh.

In the context of Padilla's other memes in his feed, the bartender set just seemed like a funny idea. Comments on the post included this gem, "go make mommy an appletini." That seems like the correct response. ‌

Once the meme hit Facebook it was shared tens of thousands of times, according WDSU, one post of the meme was shared more than 30,000 times and got more than 2,000 comments, most of which indicated people were not getting the joke. Here's one example.

"This is disgusting. Let's be sure they stock a good supply of candy cigarettes to go along with this early education set," one Facebook user wrote, according to WDSU.

The meme got so much traction, once Facebook user shared the image of the fake Happy Hour Bartender Set to the Fisher-Price Facebook wall with the comment, "Is this for real? If so how tacky!"

The toy company responded with, "Please know that this product is not endorsed, produced, or approved by Fisher-Price." Even Snopes has published a post reassuring folks the bartender toy is just a joke.

And now other comedians appear to be getting in on the fun.

So now everyone can calm down. Our kids are safe. There is no such thing as a bar set for toddlers, and Fisher-Price isn't trying to sell toys promoting getting drunk. But please take a moment to enjoy the very best part of the fake ad: the baby bartender's face. Amazing.

Romper reached out to Padilla to get his reaction to all the controversy his meme sparked, but hasn't heard back.