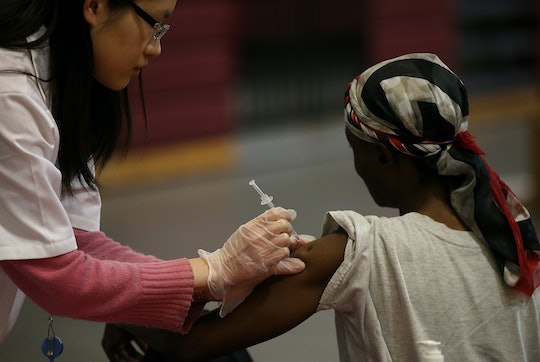 Flu season is never fun. It's long, exhausting, and filled with precaution. This flu season hasn't been any better this year than in years before and it isn't going to get any better — just take it from the Centers for Disease Control and Prevention. The news is grim — the flu has sickened millions of people in the United States, according to the CDC, and unfortunately, it still isn't over.

Between 6 and 7 million people have already caught the flu across the nation this flu season, according to the NBC News, with a good portion of those people ending up in the hospital due to complications from the flu.

This information should be vital and extremely helpful to people who have not caught the flu or are afraid of catching the flu — especially since this is the first time that the CDC is reporting the news in real time during the season, according to NBC News.

The good news is, the CDC is going to continue to report these numbers throughout the rest of the flu season, and they're only going to grow. This is because, the CDC has reported that flu season is far from over.

Considering that it is still the middle of winter, it could be a while before people no longer have to worry about not catching germs. So far, only 30 states have reported "widespread flu activity," according to CNN, although the flu is prominent in every single state in the nation.

The flu isn't something that people want to mess around with. Although it might sound grim, it's important to note that the flu does kill people each year in spite of people being aware of how serious the flu is. Because of this, people will want to take all the precautions they can, especially since there is no telling what this flu season will entail.

"It's a little too early to know what's going to happen with this flu season," Dr. Alicia Fry, from the CDC, told NBC News.

Flu season typically starts in late fall or early winter and lasts until early spring, according to Very Well Health. And considering that it is only the second week in January, it could be weeks before the "flu season" officially ends.

But, people (especially parents) don't have to live in fear for the rest of the winter. Although the flu shot may be ineffective in some cases, getting the flu shot is better than not getting vaccinated against the flu at all, according to CNN.

It's not too late to get a flu shot, according to the New York Times — the vaccine takes two weeks to become effective, but it still will be able to cover the rest of the season. And if people are at a loss as to where to get their flu shot, this helpful tool from the CDC will locate the place closest to them where they can get a flu shot (spoiler alert: you get one at most grocery stores).

Although this stuff is common knowledge, it's still important to be reviewed, especially since the flu still takes people by surprise. Flu symptoms will surprise people — they will often experience a fever, chills, along with aches and pains associated with the illness, according to the CDC.

But there are ways to make sure you're doing the best to prevent the flu (that don't include the flu shot). Avoiding contact with sick people, washing your hands, and disinfecting surfaces will help keep the flu at bay, according to the CDC. And people should continue to do this until the flu season is over.

Flu season year after year is inevitable — it always comes around and it comes with a vengeance. But the only way to stop yourself from getting the flu is by taking preventative measures. And since it's still not over, this is all that people can do.