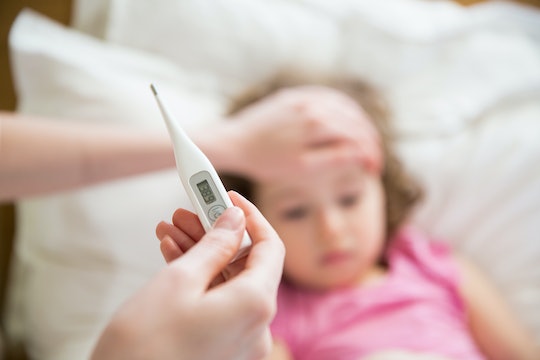 The Flu Is Officially An Epidemic In The U.S., & Here's What Parents Need To Know

Correction: A previous version of this story incorrectly identified the outbreak classification of this season's flu. It has been updated with accurate information.

You've probably already heard that this year's flu season is shaping up to be a nasty one, but what you may not know is that the flu is officially an epidemic in the U.S., according to Business Insider. An outbreak of such severity means that individuals and families may need to take additional precautions. Along with reducing risk of contamination, being informed of treatment options is also important.

The influenza virus has spread to every state in the U.S. except for Hawaii and the District of Columbia, according to a recent report by the Centers for Disease Control. Along with being widespread, this year's flu season also started earlier than usual and is particularly potent. "We are currently in the midst of a very active flu season with much of the nation experiencing widespread and intense activity," stated CDC Director Brenda Fitzgerald to reporters during a briefing.

Recent reports have led officials to believe that this might be one of the most severe flu seasons the U.S. has experienced in years, potentially comparable to the 2014-2015 season, during which 40 million Americans contracted the flu, 19 million people received treatment for the flu, and 970,000 people were hospitalized for it, according to NPR . "Flu is everywhere in the U.S. right now. There's lots of flu in lots of places," director of CDC's influenza division Dan Jernigan told NPR. The pervasiveness of cases classifies the flu as an outbreak.

An outbreak is declared when more cases of a disease are recorded in an area than anticipated, according to The Sun. This could mean a community as small as a neighborhood or as large as an entire country. There are three classifications of outbreak — an endemic, an epidemic or a pandemic — and each has unique characteristics. As of now, the flu has been declared an epidemic. An epidemic spreads rapidly, in the span of two weeks or less. Both the Ebola and SARS outbreaks were classified as epidemics.

The Sun defines an endemic as "an outbreak that occurs at a predictable rate in a certain area or among a set population." Another example of an endemic is the chicken pox, as it is common but predictable in children. Additionally, endemics "remain at a steady state, but do not disappear from a population."

Finally, a pandemic is the worldwide spread of an infectious disease. The influenza outbreak didn't spread quite that quickly and appears to be isolated to the U.S., keeping it at an endemic for now. However, Dr. Anthony Fauci, director of the National Institute of Allergy and Infectious Diseases (NIAID), told BuzzFeed that the virus' start is worth noting:

This year's flu season had an early start, with a lot of cases accumulating in the past month and more hospitalizations and deaths in certain regions of the country compared to last year — this is a tough year.

The holidays marked a spike in flu cases, likely due to higher rates of domestic travel and germ spreading, along with the extreme cold weather experienced by much of the country, according to BuzzFeed. High numbers of people going to the doctor for flu treatment, as well as high number of hospitalizations have both contributed to the CDC's perceived severity of this year's outbreak, according to NPR. However, CDC officials caution that the flu is unpredictable and the course of this outbreak could slow down or stop at any time, making it a more typical flu season.

The best treatment for the flu is prevention. CDC Flu Director Dr. Jernigan stated in a tweet:

Vaccination is our main tool to prevent flu infection and flu vaccination efforts should continue as long as flu viruses are circulating, but antiviral drugs are the most important tool for flu treatment.

However, there are Antiviral drugs to treat the flu should you contract it. These include prescriptions medicines — such as pills, liquid, an inhaled powder, or an intravenous solution that fight the flu in your body, according to the CDC. They are not available over the counter, meaning that you should see a doctor as soon as possible if you believe that you have the flu to see if this sort of treatment is necessary. In the midst of an epidemic level flu season, prevention and treatment are key. If you haven't already gotten your flu shot, consider doing so now. Other important precautions include washing your hands regularly, keeping hands out of eyes and mouth, and covering coughs and sneezes with your hand or a tissue. Do your part to stop the spread of the flu and stay safe this season.