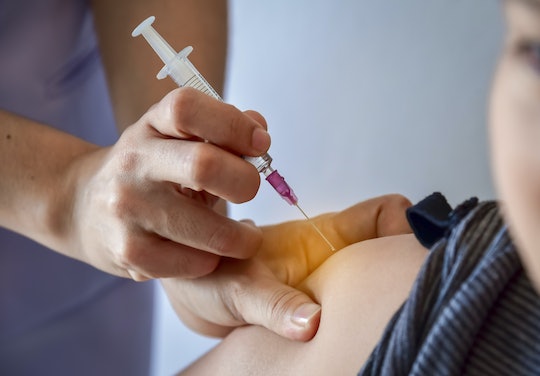 Study: The Flu Shot Is More Effective For Young Kids, So Get It ASAP

Speculation that the flu vaccine might be less effective this season has proven to be correct, but it's not all bad news. According to the Centers for Disease Control and Prevention's Morbidity and Mortality Weekly Report, the flu shot is more effective for kids. The vaccine's overall effectiveness is 36 percent, but it varies significantly by age group. Children 6 months to 8 years old are experiencing 59 percent effectiveness, whereas the effectiveness for adults 18 to 49 is 33 percent. The flu shot has only been 5 percent effective for kids 9 to 17, but it's still important everybody, regardless of age, take advantage of any protection they can get, especially considering the danger posed by this year's flu strain.

The flu has been severe this season, the American Academy of Pediatrics reported, and it's responsible for 7.7 percent of all outpatient clinic and emergency department visits, just as it did during the peak of the 2009 H1N1 pandemic. The flu hospitalization rate is currently at the highest rate since such data has been recorded. According to the CDC, 63 children have died from the flu this season. Vaccination is still recommended, regardless of the low effectiveness rates, because will still prevent thousands of hospitalizations and deaths. During the 2014–2015 season, when effectiveness rates were less than 20 percent, the CDC estimated the flu shot to prevent 11,000 to 144,000 hospitalizations and 300–4,000 deaths.

Vaccination is important not just in terms of protecting the patient who actually receives the shot; lowering the infection risk for more people helps prevent the virus from spreading to those who haven't been vaccinated, and those for whom the vaccine was ineffective. A person's age, infection history, and vaccination history can all impact the effectiveness of the vaccine, and some people are unable to receive the vaccine due to medical conditions. Babies under 6 months old can't be vaccinated, either. Therefore, it's imperative that pregnant women receive the vaccine not only for their own benefit, but in order to pass on their immunity to their newborns.

Just in case you have any further doubts about the flu vaccine, here's a refresher on some common misconceptions: the flu vaccine does not, and cannot, cause the flu. Patients may develop a low-grade fever, headache, and muscle aches after receiving the flu shot, but according to the CDC, studies have found no difference in flu shot side effects, and those from placebos. It's still possible to catch a cold after receiving a flu shot, which could be mistaken for the flu, and of course, some still catch the flu after being vaccinated. But they don't catch it from the vaccine, and symptoms may be less severe because they were vaccinated. No insurance? Several drug stores, as well as supermarkets and big-box chains with in-store pharmacies, offer the flu shot for as little as $20, according to Fortune, and the current epidemic has led many hospitals and state and local health departments to offer free vaccinations.

Everyone 6 months and older who's medically able to receive a flu shot should get one every year. The most prevalent strains vary from season to season, and each year's vaccine is specifically designed to target those strains believed to be the biggest threat. Even when the viruses haven't changed from the previous season, it's still important to get a new one, because a person's immunity declines over time. The CDC recommends that children 6 months to 8 years old receiving the flu vaccine for the first time get two doses, at least 28 days apart, as should those who missed the first-time double dose even if they have been receiving one every year. A child who needs two doses, but only gets one, may not receive any protection from the flu at all. However, there is no evidence that a second dose is beneficial to any other group. So get your shot, wash your hands, and stay far away from anyone displaying symptoms. We've only got a few more weeks to go.

More Like This
New Research Finds Parents’ Mental Health Improved During The Expanded Child Tax Credit
The President Of Ireland Wants To Get Rid Of Homework & Honestly, He's Onto Something
14 Recipes For Sick Kids When Everyone's Tired Of Canned Soup & Crackers
Why Your Vagina Smells Like Fish & What To Do About It
What Parents Are Talking About — Delivered Straight To Your Inbox