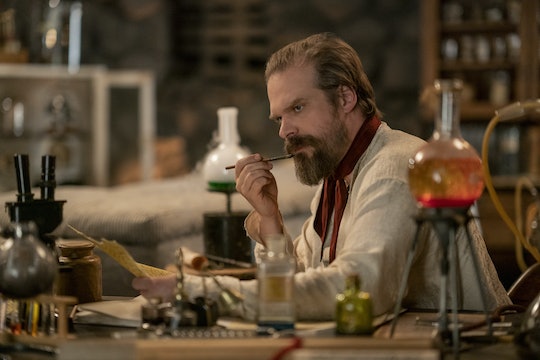 Harbour plays a version of himself, an actor, who comes from a long line of actors, even though in real life that’s not the case at all. In this mockumentary, he finds an old tape from one of his father’s, David Harbour Jr.’s, failed TV stage plays. He launches an investigation to find out why his dad made a play about Dr. Frankenstein’s famed monster creating a monster of his own, aptly named Frankenstein.

The short is full of grainy shots from the faux found footage play and features actors who are meant to have been just as awful as they look in the shoddy setting Harbour’s father created for the production. While the present day Harbour seeks to find out what led his father to create such a poor excuse for a play, cut-away shots of his father show an actor with a dramatic theatrical British accent who takes himself too seriously, which might have to do with the fact that he studied at Julliard.

The televised play within Frankenstein’s Monster’s Monster, Frankenstein focuses on a young Dr. Frankenstein who sometimes forgets that the monster isn’t named Frankenstein, as plenty of people mistakenly refer to him as such. Harbour’s father plays the monster who meets a scientist visiting the mansion in search of proof that Frankenstein's monster actually exists.

But what starts off as a shaky play gets worse as Harbour’s father breaks character to give his younger on-screen co-star pointers. It’s kind of a mess, but one that works within the mockumentary setting that is set up at the beginning of the short.

It alternates between Harbour researching possible ties his father might have had to the mob and interviewing those who took part in the production decades ago and ads for Julliard and a business called Chekhov Guns & Ammo, which is also called out in the play when someone mentions the Chekhov’s Gun concept in drama. There’s even a commercial for London broil beef wellington starring Harbour’s father. The mini mockumentary is similar to those of Documentary Now!, which features spoofs of historical events put into a faux documentary style movie each episode.

There is a lot going on in Frankenstein’s Monster’s Monster, Frankenstein, but I have a feeling it was meant to be as messy and all over the place as it is. The featurette doesn't take itself too seriously and even in the trailer, the only review that appears on screen says, "More twists than Stranger Things" from David Harbour who stars in Stranger Things. While the play within the short film deals with daddy issues between Frankenstein and his monster, the present day shots show Harbour pouring over his own issues with his father who isn't around to give him any of the answers he needs.

Overall, Frankenstein’s Monster’s Monster, Frankenstein is supposed to be as wacky as it is and the plot is all over the place. But with a mockumentary that has zero basis on real life events, you can take it anywhere you need it to go and it usually sticks with most audiences. As long as no one goes into the short with expectations of seeing a version of Harbour to take seriously, they will probably get all of the little jokes and cheeky one-liners.