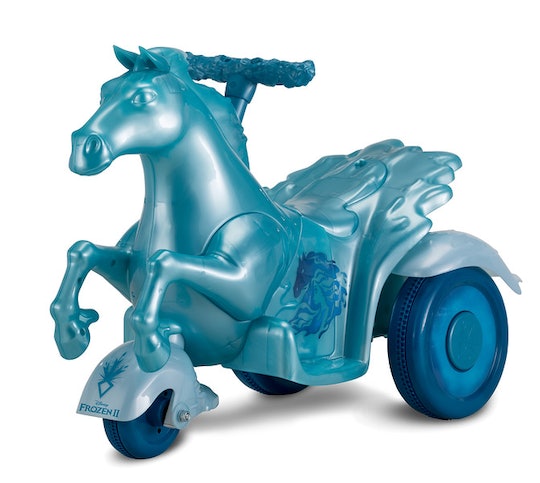 My daughter is obsessed with horses. (Or, as she likes to say, "a-sessed.") We have several varieties, ranging from plush to oversized to miniature ones that embed in the carpet only to be discovered when we step on them. Moral of this story? There's a new Frozen 2 ride-on horse and, basically, it's bound to make its way into my — and your — house in one way or another.

Because, well, it's pretty amazing. The horse — which Disney released last week at Walmart — is designed to mimic a Nokk, "a mythical water spirit that takes the form of a horse, who uses the power of the ocean to guard the secrets of the forest," according to ScreenRant.com. Elsa can be seen encountering the Nokk during a scene featured in the Frozen 2 trailer.

OK, so that little bit of knowledge about a Nokk makes the release of the Frozen 2 Water Nokk Ride-On Toy that much more exciting, right? Designed by Kid Trax, the toy even relies on LED lights to glow — yes, glow — as your little one takes it for a spin in the backyard or up and down the sidewalk. Plus, it comes with a 6-volt rechargeable battery and charger so it won't go kaput in the midst of an afternoon ride.

In the market for Frozen ride-on toys? Well, the Nokk horse is not the only Frozen vehicle Walmart has on the market. In fact, you can score several different modes of transportation for a little one in your life, starting with this Power Wheels Disney Frozen Jeep Wrangler ($259, Walmart) which is the perfect choice if you need a two-passenger option.

Of course, you could also just go all in with the Disney Frozen Sleigh 12-Volt Battery Powered Ride-On Toy ($198, Walmart) and win the parent of the year award with your little Elsa, Anna, or Kristoff. The sleigh plays music and only rolls at 5 MPH, so you don't have to worry about your kids cruising too fast.

Then again, you can always go old school when it comes to your children and forward motion. Opt for the Frozen 3-Wheel Kick Scooter ($25, Walmart) or even the Disney Frozen Kids Glitter Rollerskates that come with matching knee pads (Walmart, $16).

And no matter the riding toy you choose, be sure to top it — and your kid's head — with a helmet, like this Frozen Tiara Helmet (Walmart, $17-$19 ) available in child and toddler sizes.

Frozen 2 hits theaters on Nov. 22 and promises a new adventure featuring, of course, Elsa and Anna, as well as beloved Kristoff, Olaf, and Sven. According to IMDB, kids' favorite characters will leave Arendelle to "travel to an ancient, autumn-bound forest of an enchanted land" where they "set out to find the origin of Elsa's powers in order to save their kingdom."

Yeah, so basically it sounds absolutely amazing, which means all of the songs, toys, and other merchandise that comes along with it are bound to be, too.

Now, let's hope — for parents' feet everywhere — they keep the tiny toys to a minimum.