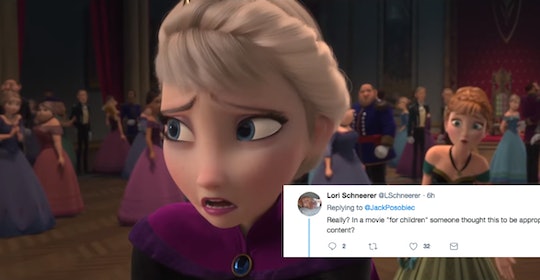 The 'Frozen' Director Says Elsa Could Be Gay, & Some Parents Are Freaking Out

Ever since Disney's Queen Elsa first debuted in 2013, people have been debating whether her story, as well as her painfully enduring theme song (just me?) are allegories for the LGBTQ "coming out" process. In a recent interview with the HuffPost UK, Frozen's writer-director said that Elsa could be gay in an upcoming sequel, keeping it nice and vague so she didn't bite the hand that feeds her, but the mere acknowledgement that it's possible has sent some homophobes on Twitter into a full-blown gay panic.

If you've somehow managed to avoid the juggernaut of a film, a quick explainer: Elsa suffers from a magical affliction that causes everything she touches to freeze, and as a result, she spent her entire life locked away from society, hiding her condition. Eventually, she runs out of her last f*ck and decides to embrace her snowy self, telling her royal subjects to deal with it. This is seen by some LBGTQ people, and allies, as encouraging viewers to not be ashamed of their orientation. Elsa also doesn't land herself a man at the end, unlike her sister Anna, which some bigots believe is further evidence of Disney pushing the "homosexual agenda" on kids (because any woman or girl who isn't actively pursuing marriage at all times is obviously a lesbian).

Then there's that song that children will not stop singing, no matter how much I beg them: "Let It Go." Lines like "Conceal, don't feel/don't let them know" give way to "Can't hold it back anymore" and "I don't care what they're going to say." Some people on both sides of the coin view it as a "coming out anthem," according to the Guardian.

The composers have never confirmed that was their intention. Kristen Anderson-Lopez, who wrote the song with her husband, Robert Lopez, told Fresh Air's Terry Gross that she thinks "don't allow fear or shame to keep you from being the person you should be," is a good lesson for kids to hear before hitting their teens. "If they've been living with fear and shame," she reasoned, "then it's really going to hit the fan." That could apply to LBGTQ kids, but certainly not exclusively.

Still, Twitter's been going hard on the #GiveElsaAGirlfriend campaign ever since, and now writer and co-director Jennifer Lee has addressed the question, sort of. "I love everything people are saying [and] people are thinking about with our film ― that it's creating dialogue, that Elsa is this wonderful character that speaks to so many people," she told HuffPost UK. "It means the world to us that we're part of these conversations."

But will Elsa get a queen of her own in the 2019 sequel? Lee stopped short of providing a direct answer, saying instead that she writes "from character-out" and would wait for Elsa to "tell" her whether she's queer or not. Sure!

Even the barest threat of a non-heterosexual character seems to be too much for some people, as evidenced by the replies on a recent tweet by an alt-right conspiracy theorist whose followers want him to know that they will most certainly not be taking their grandchildren to see Frozen 2. "MIND CONTROL!" one wrote, while another called it "Hollywood brain washing." Many had the very confusing argument that it was "inappropriate" to show a same-sex couple in a children's movie, claiming that the very existence of a romantic partner would "sexualize a little kids cartoon." And of course, there were the real-life Helen Lovejoys, arguing that "Children need to be children." To which the rational world would reply, "Why is it OK for Anna to have a fiancé and a boyfriend in the first film, then? Huh? Huh?"

Though I doubt that Disney will allow Elsa to be retrofitted as an out and proud lesbian, and I'm not even sure they should, kids do need to see LGBTQ characters in media, because they need to know that LGBTQ people exist, and they're normal. Queer kids need to know they're not alone, and straight/cisgender kids need to learn that there are all types of people in the world. According to Pew Reseach, 4.1 percent of the overall U.S. adult population identifies as LGBT, and the youngest generation comes in at 7.3 percent. We're trending gayer every year, and it's not because there's something in the water; those stats go hand-in-hand with the uptick in people who accept LGBTQ people and make it safe for them to come out.

According to the Human Rights Campaign's latest report on LGBTQ youth, 91 percent are out to their friends, and 75 percent say their peers don't have a problem with their orientation. However, only 56 percent are out to their family, and 30 percent say their family is homophobic, biphobic, or transphobic, meaning a gay princess would be even more educational for adults than for kids. The world will continue to get better with each generation, one small step at a time.

More Like This
'Hocus Pocus 2' Gives Us A Glimpse Of The Sanderson Sisters As Kids
Disney+ Just Added A New Sing-Along Version Of The Nightmare Before Christmas
The Hocus Pocus 2 Soundtrack Is A Spooky Mix Of Old & New
Witchy Vibes, Salty Language, & More: What Parents Need To Know About Hocus Pocus 2