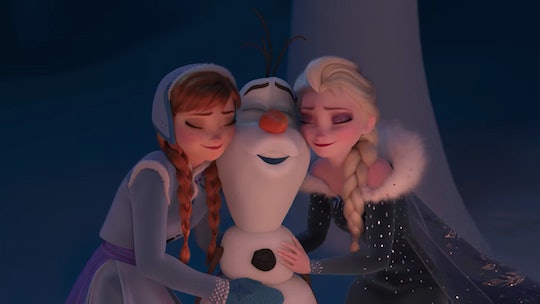 The ‘Frozen’ Short Has Been Cut From ‘Coco,’ But Parents Can Still Catch It Elsewhere

Families who are planning a trip to the movie theater to catch Disney-Pixar's Coco might be surprised to discover something is missing before the feature presentation. That's because Olaf's Frozen Adventure, which originally screened before the movie started, has officially been pulled from the critically acclaimed movie. However, although the Frozen short has been cut from Coco, parents can still catch it elsewhere.

The decision to remove Olaf's Frozen Adventure from Coco probably comes as no shock to those who already experienced the not-so-short short. At 21-minutes long, the flick was met with a barrage of confusion and negative attention. In fact, many were downright angry about its length — as the typical short before a Pixar film is about 5 minutes, according to The Washington Post. “We are creatures of habit, and Olaf’s Frozen Adventure eventually feels like the grinning house guest who won’t leave, even though the party was supposed to clear out long ago," the publication reported. “As each successive song in the four-tune reel cues up, moviegoers’ reactions can be heard to switch from laughing irritation to growing mockery to outright anger.” Still others, like Mashable, declared the pairing of Coco with Olaf's Frozen Adventure as "culturally tone-deaf."

Twitter definitely echoed this sentiment. One user wrote, "Sometimes I wake up covered in sweat and screaming, filled with the horrifying certainly that I'm STILL watching that seemingly endless Frozen "short" that played before Coco."

Many have speculated the decision to pull the Frozen short from Coco was a direct response to the less-than-stellar reviews it has received. However, this isn't the case at all, reports Entertainment Weekly. “This was always promoted as a limited run so it’s not really a story — the end of our Olaf theatrical play is coming next week,” a Disney representative told the publication. “All our ads and messaging called it as such.”

If your family is looking to re-watch Olaf's Frozen Adventure (or experience it for the first time,) you're in luck. It will air on ABC at 8 p.m. on Thursday, Dec. 14, reports The Orlando Sentinel. This 21-minute adventure features the beloved snowman, Olaf (Josh Gad,) who is trying to help Anna (Kristen Bell) and Elsa (Idina Menzel) create holiday traditions of their own. He sets out to find only the best for the sisters, but encounters a few (hilarious) obstacles along the way. With four new songs and plenty of laughable moments, your kiddos will be able enjoy the heartwarming flick at home — without then having to sit through a two-hour movie on top of that.

I took my three kiddos — ages 6, nearly 4 and 20 months — to watch Coco on Thanksgiving weekend, before anyone could give me a heads-up about Olaf's Frozen Adventure. Because all three of them love Frozen and Frozen Fever, I was pretty excited the newest Frozen adventure would be playing before the movie. But then it just. Kept. Going. Granted, my toddler was captivated for all 22 minutes. But my older two kept asking, "Is this the movie? When is 'Coco' going to start?" The feature presentation was well worth the wait; we love Coco! The Frozen short before the movie, however, was just so out of place. When I read it was originally intended as a holiday special for TV, it all made sense. My kids will be excited to watch Olaf's Frozen Adventure again, that's for sure. As for me? I might just use that as an opportunity to catch up on some laundry ...