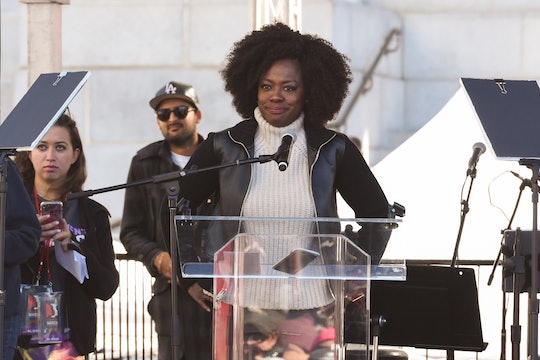 Here's The Full List Of Speakers For The 2019 Women's March

The 2019 Women’s March is much more than just a walk through the streets. It’s a message to people everywhere that women won’t stand for bigotry, hatred, and misogyny. It’s also a chance to come together and enjoy the company of other women just like you and I, and to hear the voices of some inspiring and educational speakers. Here is the full list of speakers for the 2019 Women’s March and it is quite the lineup of luminaries, activists, and influencers.

First off, here’s a little information about the main Women's March in Washington D.C. It will begin at 10:00 a.m. at Freedom Plaza, 1455 Pennsylvania Ave. NW, Washington D.C., 20004, according to the Women’s March website. The path of the march will be a half-mile walk to the rally point, which will take place at Freedom Plaza. The march will begin at 11:00 a.m. ET and the rally kicks off at 1:00 p.m. ET. The march is ADA accessible and there is a lot of great information on the website about how to find that rally point, how to plan for the weather, and how to navigate transportation in that busy city. Perhaps the most important tip: wear comfortable shoes.

Once the march reaches the rally point there is an impressive lineup of people scheduled to speak — 44 speakers in all. They include recognizable names like Ashley Judd and Gloria Steinem, and lesser known but no less important people like Judith LeBlanc, the Director of the Native Organizers Alliance.

Here is the full list, according to the organizers:

The march also has a feature known as the Artist Table which, according to Slate, are celebrities who may not be present at the event but have agreed to act as ambassadors and advocates for the mission of the march. This year’s Artist Table includes names like Edie Falco, Harry Belafonte, and Maggie Gyllenhaal.

Though there are many more non-celebrity speakers than celebrities, some of those famous names have garnered a lot of attention in the past. President Trump took to Twitter in 2017 to express his distaste for the messages he was hearing.

But those messages are well received across much of the rest of the nation and on Jan. 19 millions of women will join those who have protested in the past by participating in the 2019 Women’s March. For full details and to find a march in your area visit the Women’s March 2019 website.

Editor's Note: A previous version of this article stated that Amanda Nguyen was speaking at the Women's March. It has since been updated.