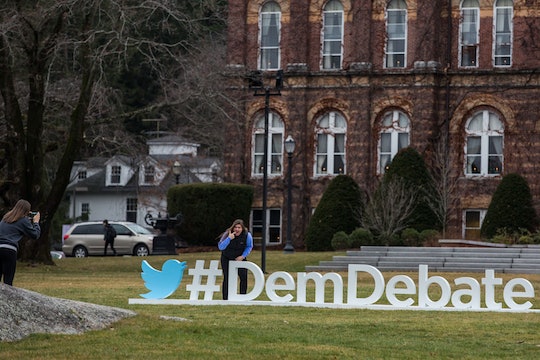 The Funniest Democratic Debate Tweets Were Entirely On Fleek

Hillary Clinton, Bernie Sanders, and Martin O'Malley faced off again at the ABC Democratic debate on Saturday, Dec. 19. And while there was plenty of action on the main stage in Manchester, New Hampshire, the Twitterverse proved equally informative and entertaining. The funniest Democratic debate tweets this time around rivaled some of the best we've seen during any of the primary debates, and that's saying a lot, considering the impressive showing Twitter users have had over lo these many months of televised sparring.

From commentary on the networks hosting the debates — "CNN hired WWE writers for this debate intro?" — to the audience — "DEAR GOD WHO IS COUGHING?" — and the candidates themselves — "Donald Trump googled 'caliphate' during the commercial break." — this has been an active and productive election season for Twitter's funniest politically savvy, or at least politically entertained, users.

Look, in many senses the race to the Oval Office is no laughing matter. After all, we're trying to determine who will decided matters of national security and have veto power over all legislation passed through Congress. That said, the campaign is politics, not government, and politics, with its necessary grandstanding and donor wooing and, yes, televised debates, is often hilarious. It's no wonder these debates often inspire witty, even hilarious takes from viewers, and in 140 characters at that. During an evening of at times longwinded answers, that's a godsend.

Here are some of the funniest tweets from the Democratic debate on ABC Dec. 19.

8 p.m. (more like 8:30 p.m.) on the Saturday night before Christmas had a lot of people thinking conspiracy theories. But, hey, if you watched, you'll agree this debate had tons of substance.

And Then The Debate Ran Behind Schedule, Which Had People Like...

I'd say the fellow above had the right idea.

Because if you were at a holiday party, perhaps that egg nog went to your head, and you needed to turn to the Twitterverse for a cheat sheet.

O'Malley gave the debate his all — at times, a little too much. Jazz hands, begging for a chance to speak, and some major stress-face proved O'Malley is not ready to pull out quite yet.

While Sanders' hair was looking more polished than usual, the senator had a couple of moments when he made awkward noises, raised his voice a little too high, and just all around sounded like Larry David (he even used the Curb Your Enthusiasm phrase "having said that,"), but LD on his grumpiest day.

Hillz, who was slaying the debate from her opening remarks, took a (bathroom?) break at one point and was late returning to the main stage. Oops. I don't think she's sweated it, though. She's been in the Situation Room, people. This is nothing.

And here I thought The Hilz owned the pant suit; looks like O'Malley might be beating her in that game.

Come on guys, be cool. Don't be like, uncool. #DemDebateAndChill

They did throw a lot of (earned) shade at The Donald.

It's Saturday night, people, let's get this show done, like, rn. Just kidding, it was actually a kick-ass show, and any excuse to spend Saturday night in my Snuggie is fine by me.